Resolving Differences in Data between Google AdWords and Analytics

If your organization uses both Google AdWords and Google Analytics, you’ve probably noticed differences in the data they report. We’ve all struggled to reconcile the clicks reported by AdWords with the traffic stats we see in Analytics. We’ve all wondered why the PPC team reports higher conversion rates from AdWords than we are seeing in Google Analytics.
It's not quite like comparing apples and oranges, but AdWords and Analytics do report data differently. As the resident data guru in our organizations, we need to dig into the meaning of the statistics reported by each to understand these differences. With a little investigation, we can resolve the differences in the data these tools report, explain those differences to our organizations and ensure that business decisions are made based on a proper understanding of the data. 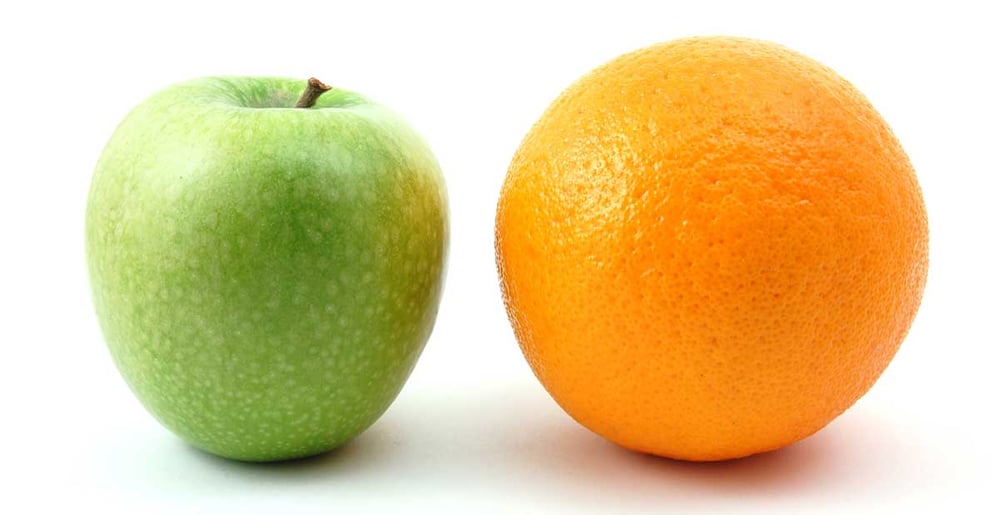 Sessions and Users vs. Clicks

There are three Analytics metrics we commonly use to analyze traffic to our websites: Sessions, Users and New Users. Unfortunately, none of them are the same as the primary AdWords metric: Clicks.

Here is a custom report that shows Sessions, Users and New Users. Click here if you want a copy of this report to use with your own data.

During this time period, we have 77 Sessions attributed to AdWords (google / cpc), 64 Users and 58 New Users. Now, let’s switch over to AdWords and see how many Clicks were reported during this same time period. 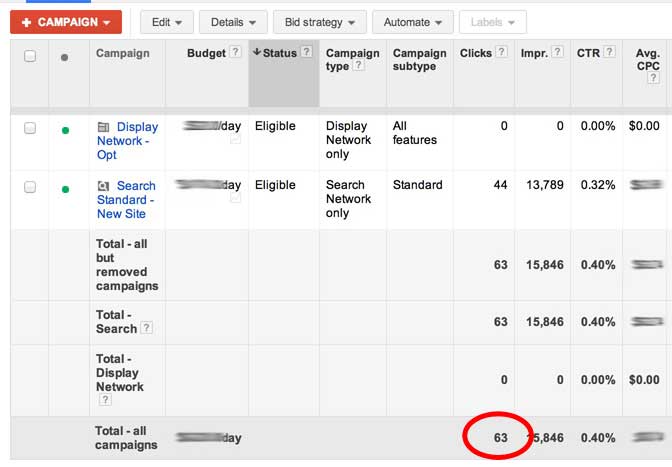 As you can see here, we have 63 AdWords Clicks tracked. Notice that is different from each of the Sessions, Users and New Users metrics reported by Analytics.

The number reported with regard to Sessions is different from Clicks because it includes all the visits that were started when someone clicked on an ad, as well as any returning visits from those folks, and possibly other people who arrived at the site via AdWords during an earlier period (say, last week). If you are using auto-tagging, and you should be, Sessions will always be at least as large as Clicks and usually larger.

To understand how Sessions are different from Clicks, it helps to read Google’s documentation: How Sessions are calculated in Analytics. You should also understand that if a visitor first finds you via AdWords and then comes back via a direct visit, that second session will still be categorized as “google / cpc.” However, if they come back to your site from an organic search, referral or a different campaign, then this second session will no longer be categorized as “google / cpc.” The campaign tracking parameters (including the source/medium parameters we are discussing here) always reflect the last non-direct click that brought the visitor to your site. The same Google help document - How Sessions are calculated in Analytics - provides more details on how sessions and campaigns are tracked.

The number reported with regard to Users is different from Clicks because it includes the unique visitors that arrived by clicking on an ad, plus any other people who arrived at the site via AdWords during an earlier period (say, last week). It can be larger or smaller than Clicks.

The number of Users may be smaller than Clicks, because if the same person clicks on your ads more than once from the same browser, that will create multiple AdWords Clicks but show as only a single Analytics User. The number of Users can also be larger than Clicks because of unique visitors coming directly back to your site that Google still classifies as “google / cpc” (as discussed above). To get a better understanding of how Analytics computes this metric, read the documentation How Users are calculated.

The reported New Users can be different from Clicks due to multiple ad clicks. If the same visitor clicks on an ad three times, only the first one is counted as a New User, but all three are counted as AdWords Clicks.

Note that the “newness” of a User is just an approximation on the part of Analytics based on cookies. If the same person visits from two different browsers or devices (e.g., phone and desktop), then they will be reported as two different Users because two different cookies are in use.

Google summarizes these differences nicely in this help document.

Differences in Conversion Tracking between AdWords and Analytics

If you are tracking conversions in both Analytics and AdWords, you will also notice discrepancies between the results reported. To reconcile the numbers, first find our how conversions are being tracked in AdWords. Conversions can either be tracked using AdWords’ tracking code or by importing conversion data from a linked Analytics account.

To determine which approach you are using, sign in to your AdWords account, click on the Tools tab, and select Conversions from the drop-down menu. You will see a table showing the conversions that are being tracked.

If the Source column says “Webpage,” you are using AdWords tracking. If it says “Analytics,” then you are importing data from a linked Analytics account.

In the right-most columns, we have selected the same goal (New Account – Trial) that is being imported into AdWords. Here, you can see that Analytics is reporting 26 conversions and a conversion rate of 10.74% for AdWords Sessions (google / cpc).

Now, let’s look at the AdWords report for All Campaigns.

Notice that the Converted Clicks is showing 26, which matches Analytics. However, the Click conversion rate is reported as 12.87% rather than 10.74%.

The reason for the apparent discrepancy is that AdWords is calculating a different conversion rate than Analytics. AdWords is showing the conversions per ad click.

Analytics, on the other hand, shows the conversions per session.

Since each click results in one or more visits, Sessions is greater than or equal to Clicks (hopefully greater, because that indicates your AdWords visitors are coming back). Here, we can see that there are 242 Sessions resulting from 202 Clicks.

Suppose, for example, you are tracking purchases using both AdWords tracking and an Analytics Goal.

If multiple purchases occur over multiple sessions, there can be other discrepancies. For example, if a user clicks on an ad and makes two purchases over two separate sessions, Analytics will report two completions. AdWords will also report two, if the goal is set up for All conversions. However, if the AdWords goal is set up for Unique conversions, then only one will be reported since there has been only one ad click.

In AdWords, the All conversions setting is usually used for tracking purchases, where as Unique conversions is typically used to track signups.

When looking at reports in Analytics and AdWords, we are really looking at two different versions of what is happening on our website. The AdWords view is centered on measuring the effectiveness of ad clicks. Analytics tends to report stats relative to sessions and users. That explains the apparent discrepancies. Neither approach is better than the other, but it is important to understand the differences so that you can correctly interpret the reports explain them accurately to your organization.