We all need a new look sometimes. Maybe it’s a haircut or a new pair of glasses; other times it’s a full makeover. Well, Google AdWords is no different, undergoing its very own facelift over the last few months.
As you may have noticed, Google AdWords has been gradually rolling out a new interface, giving select accounts beta access over time. This represents one of the largest overhauls of AdWords’ visual appearance since its launch. While the overarching process of management remains the same, even aesthetic changes can take a little getting used to. If you haven’t had a chance to re-familiarize yourself with the new face of AdWords, we took some time to go through what’s new, what’s moved and what’s similar to the current interface, with screenshots along the way.
Let’s take a look.

When you first log into the interface, you’ll see a new Overview screen featuring links to various portions of your account and a few widgets highlighting key data. 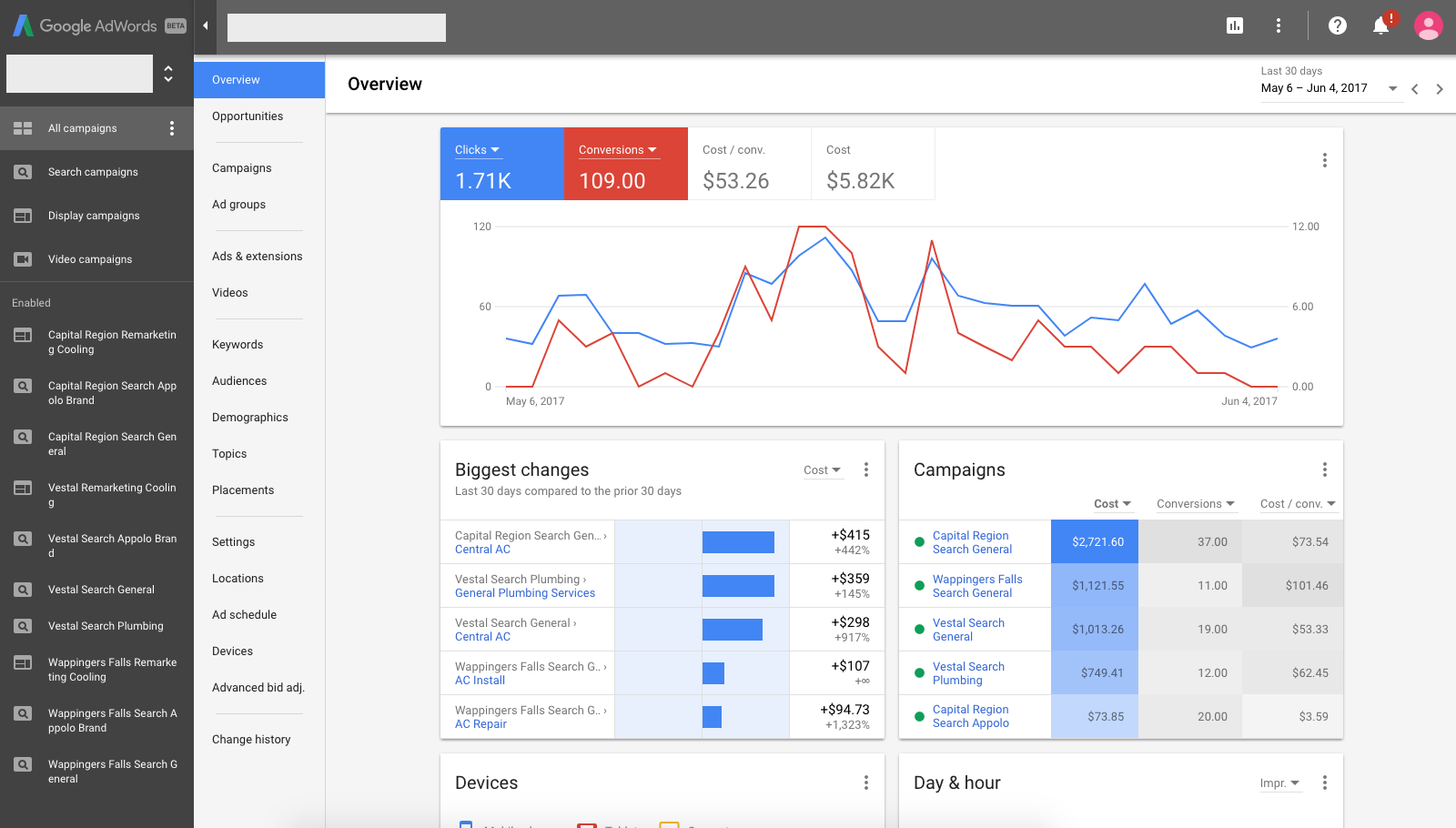 Like the previous version of AdWords, you can access individual campaigns from the list at the left. At the top, you can also filter by type of campaign (Search, Display, or Video). The change here is a matter of accessibility as this option was previously buried in a menu. Also, a number of options were rearranged, with several links now on the left menu that were previously on the top menu bar or the tabs above campaigns.

On the top graph in the Overview section, you can compare up to four metrics, using the dropdowns in each section to choose which metrics you want. This allows you to see high level performance trends, looking at how clicks, conversions or costs have increased or decreased over time.

Next, let’s take a look at some of the other widgets in this section that are providing new ways to visualize your account data.

One of the most significant changes to the new AdWords interface is the introduction of a “Biggest Changes” widget. This addition immediately draws your attention to the campaigns that saw the most dramatic increases or decreases compared to the previous time period. You can use the dropdown to choose which metric to see. By default, it shows Cost, but looking at other data, such as CPA over time, could prove valuable to determine if you’re paying more or less per lead in certain campaigns. You can also click on an individual campaign to see further data about significant changes in keywords.

The “Campaigns” widget shows top campaigns sorted by the metric you choose. In the current setup, this lets you see quick conversion and cost per conversion data from your highest spending campaigns.

The “Devices” widget breaks down the percentage of results by device category (phones, tablets, and computers). You can quickly see how much you’re spending by device and how that correlates to conversions and traffic driven across devices.

The “Day & Hour” widget offers a shaded graph showing highest (darkest) and lowest (lightest) performing times. By switching among metrics from the top dropdown, you can quickly see when you spend the most, when the best conversion rates occur, and when the best costs per lead happen.

The granular information about user behavior provided in these widgets will allow you to make precise spending decisions to maximize your campaigns.

Once you click into an individual campaign, you can see other widgets representing performance on the campaign level. Widgets unique to this view include:

While this data was previously accessible elsewhere, the visual interface allows you to quickly pinpoint the regions showing the best performance, as well as competitors most closely aligned with your search terms.

The Campaigns view setup is very similar to the current AdWords layout, with a graph at the top and a table of campaigns and metrics beneath. As in the current view, you can customize the columns you see. However, now you’ll see new symbols for options that previously existed in a text dropdown. 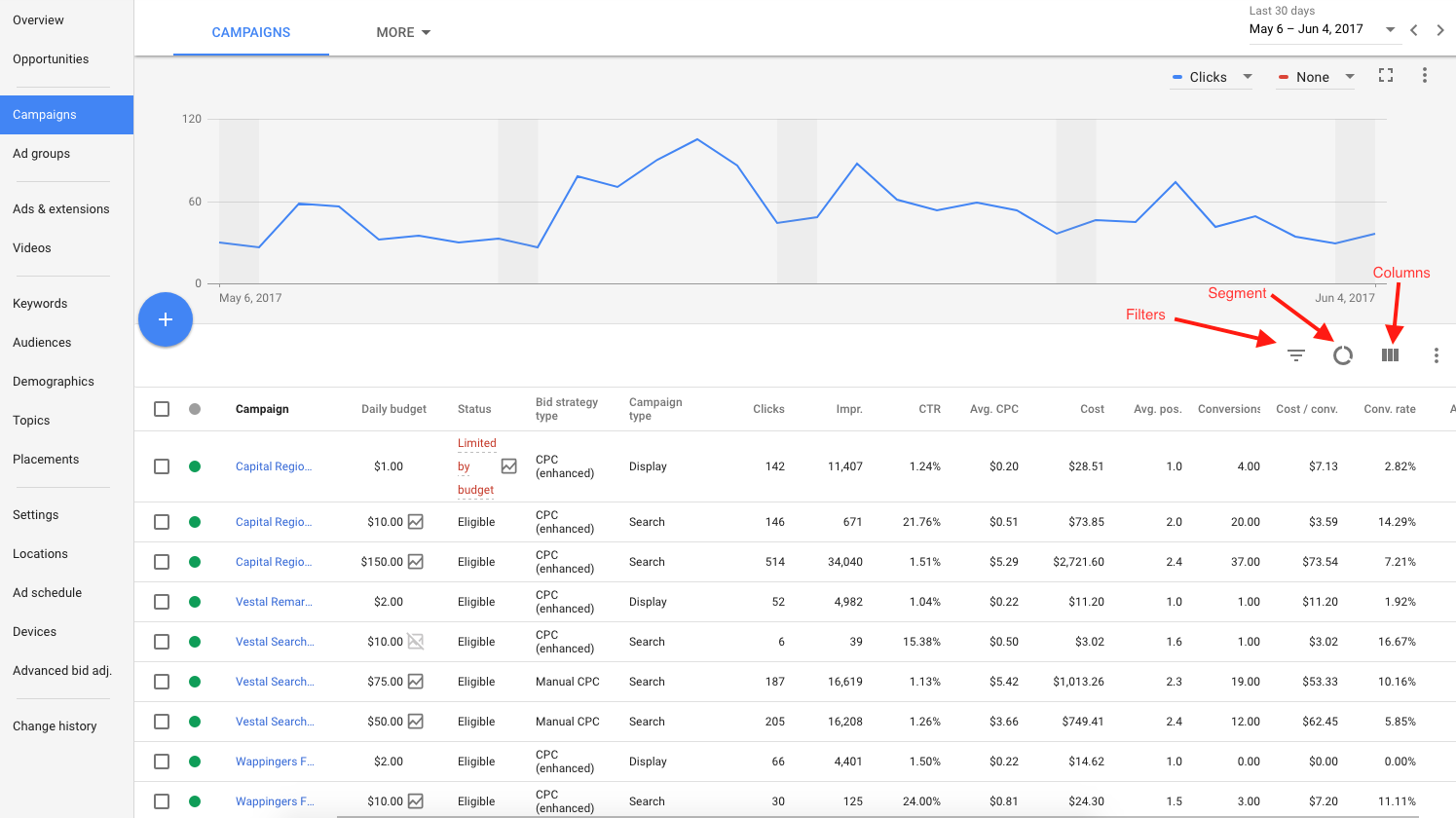 The Filters option lets you filter the campaigns displayed by anything from campaign name to performance (e.g., all campaigns with more than 100 clicks). Segment allows you to break down performance by time, device, network, or position in search results. As we’re writing this, some segment options that are available in the main interface (such as by type of conversion) are not available in the beta interface.

Finally, Columns lets you choose which metric columns appear in your view. In a marked improvement over the unwieldy menus of the current interface, you can now see a larger view allowing you to check the columns you want included. As before, you can also save custom column sets. 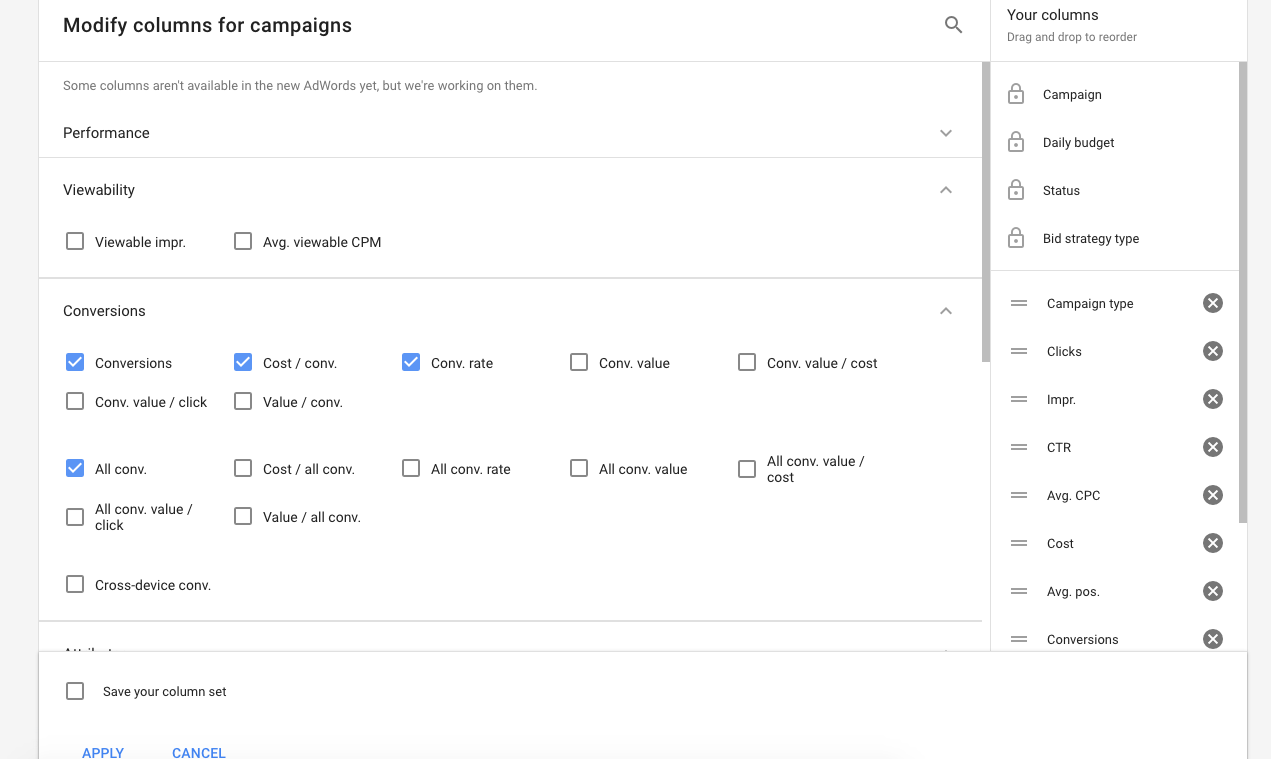 The new Campaign Settings section presents options much more concisely than the current interface. In the established layout, you have to scroll through a long page to finalize advanced campaign setup. With the new look, you can click to expand individual aspects of settings.

By clicking into individual campaigns, you can navigate to see ad group- and keyword-level breakdowns. The Keywords view bears a strong resemblance to the current interface. You’ll see a table of active and paused keywords along with metrics for each. You also have access to Search Terms and Negative Keyword, available at the top in more obvious buttons. 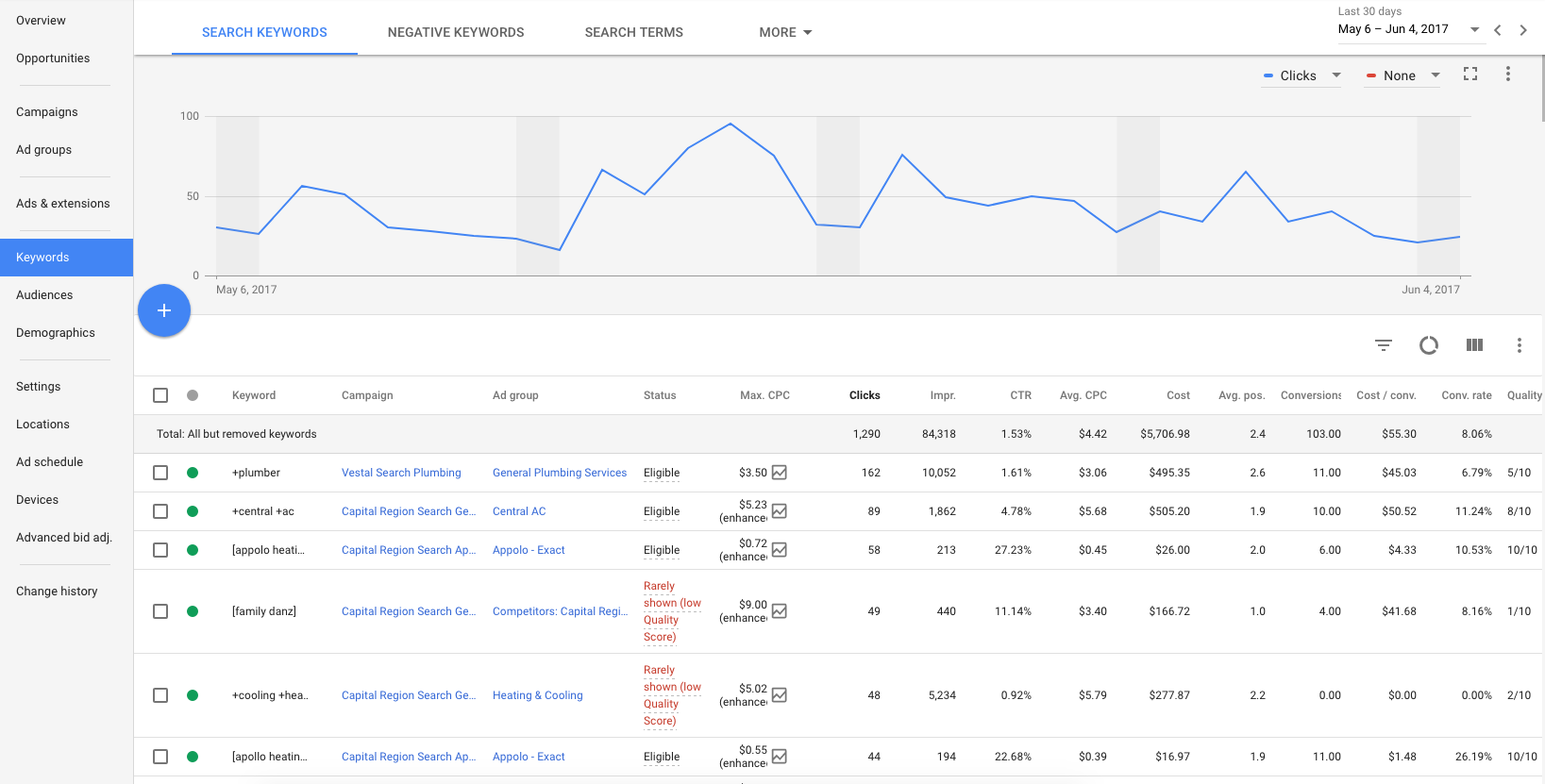 A new feature in the interface adds an additional level to bid adjustments. On top of current device, geographic, and placement level adjustments, you can now choose to bid a percentage higher or lower for specific types of interactions. This change to the interface allows you to adjust bids for phone calls vs. clicks. That means you can bid higher on calls if your business depends more heavily on people calling directly rather than going to the website. 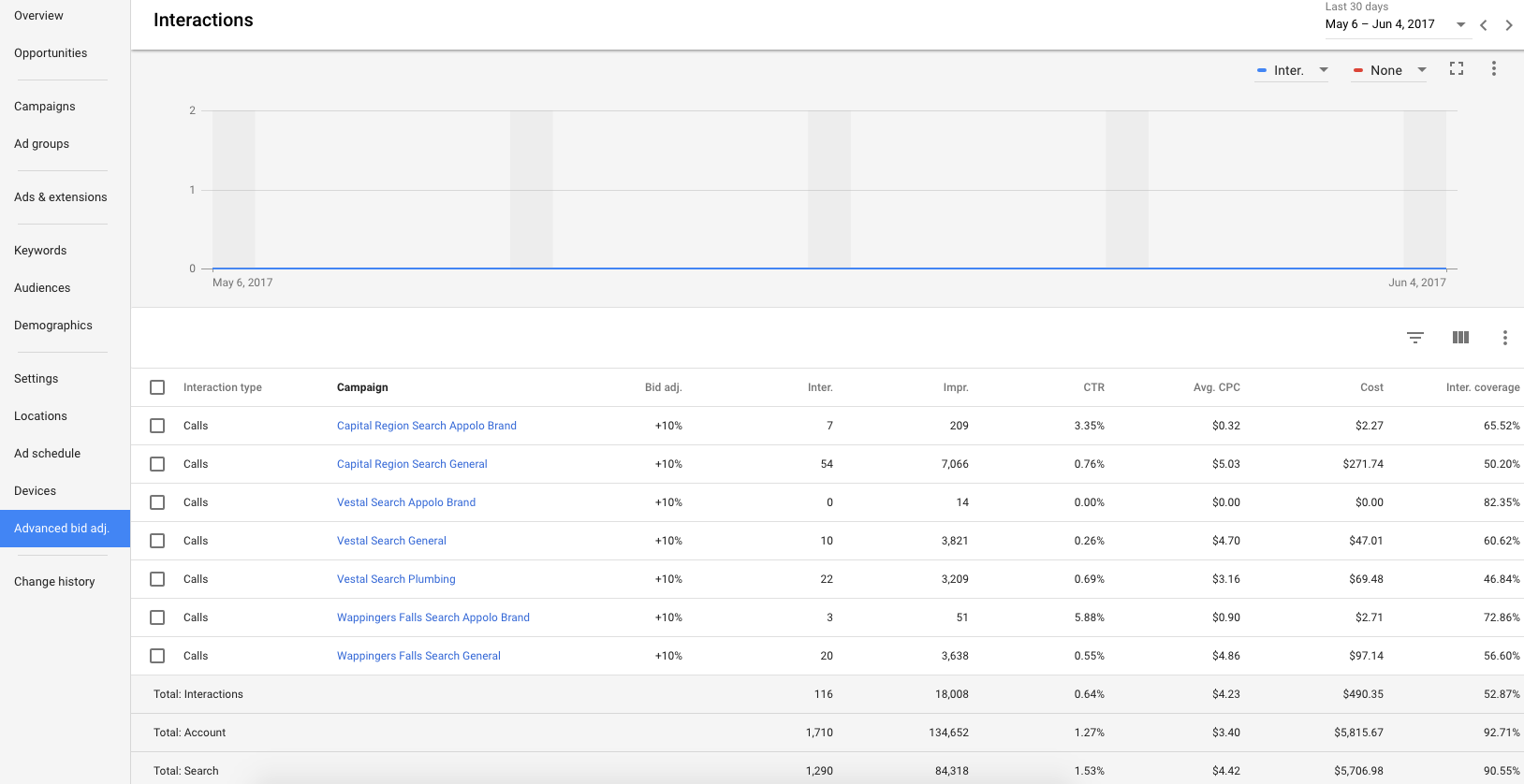 You can also use a column in the interface when viewing ad groups to see which bid adjustments are in place. With this, you can quickly pinpoint which categories are set up to sway the final amount you end up paying.

The Locations section now immediately shows a large map previously accessible only by going to the advanced location settings. The map shows you where you’re targeting ads and where you’ve excluded ads from showing up. This is helpful for quickly seeing that you’re targeting the correct region and can be easily shared with clients to match up against their desired targets. You can also scroll through a list of locations below to see bid adjustments and performance by region. 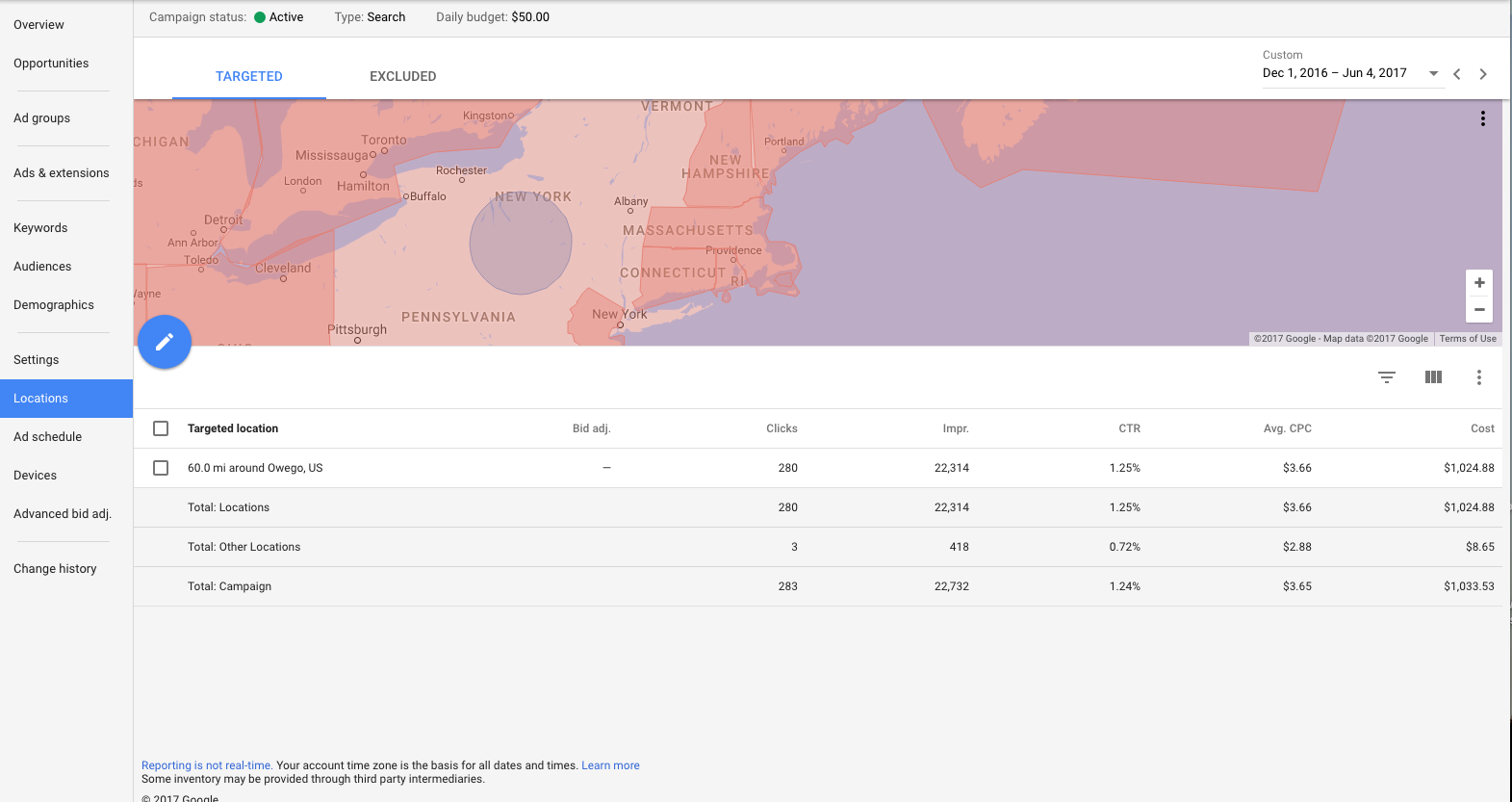 While the new AdWords interface is still in beta and missing some features, we have high hopes for Google to roll out a final widespread version that incorporates user feedback and offers granular control over campaigns. As you use the interface, you can also provide Google with feedback on bugs or additional changes you’d like to see.

For AdWords this is more than a cosmetic makeover. The new interface has functional changes that make some things easier to find and introduces some new options that can change the way you analyze and adjust your campaigns. The new interface isn’t just pretty, it’s pretty smart, too.

Do you have access to the new interface yet? What do you like so far, and what don’t you like? Tell us in the comments below!