The competition to be heard in social media can sometimes feel like you’re screaming at a rock concert. Even if you have something important to say, it can be difficult to get your voice heard.
Your time on social media takes attention and resources away from other efforts. That’s why you need to know what posts are most successful at reaching the audience you intend to reach, which messages resonate most, and what content compelled people to take action. By paying attention to your results, you can ensure your future social media efforts are based on what you’ve learned is most effective.
When you provide social media services and must report on Facebook performance to clients, you want to show more than high-level numbers. You need to account for what you posted and be able to analyze which posts had the greatest reach, and which posts drove the most interaction. Using the Megalytic “Facebook Posts Published” widget lets you see a table of your page’s posts over a selected timeframe, along with metrics for each.

When adding the widget to your report, you’ll see images and text from recent posts, along with reach, engaged users, and likes. You can customize this widget in several ways to show performance post by post.

To view further options for customizing the widget, click the gear in the upper left.

In the first dropdown, you can change the Facebook page for which you’re showing posts. However, you’ll need to connect your Facebook page to Megalytic in order to see it listed in the dropdown here. To make things easier, you can click “Apply to Report” to make all Facebook widgets in the report pull from the page you’ve selected.

Next, use the “Number of Rows” dropdown to change the number of posts you show in the report. The widget will automatically show the most recent posts up to the number you’ve allowed. If you want to ensure that you show all posts for the timeframe covered in the report, make sure you increase the allowed number of rows accordingly. 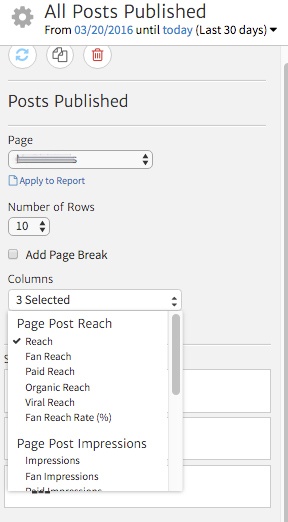 To change which metrics appear in the report, use the Columns dropdown. You can choose up to four metrics to appear next to your posts from the following options:

As you can see, these metrics allow for highly specific reporting on the performance of your posts. But with so many metrics to consider, let’s look at some of the applications for reporting, to make sure you are presenting the most useful data to viewers.

To help report on social media advertising efforts, you can use this widget to show reach and impressions obtained via paid promotion. In this example, we’ve added Paid Reach and Paid Impressions to show advertising results, along with Organic Reach and Organic Impressions to provide a picture of total performance. With this data, you can gauge how much paid advertising contributed to the whole reach of the campaign. This can also be used to show the extended reach and impressions obtained through paid vs. organic, in order to illustrate the value of paid ads.

While having people see posts is important, ultimately what you really want is to have people engaging with that content. Engagement can mean any number of actions, including clicking through to articles, liking posts, commenting, and more. Several metrics allow you to measure users’ interactions with the page. In this example, we’ve modified the widget to track KPIs related to engagement: Engaged Users, Engagement Rate, Shares, and Likes.

From this data, we can look at what posts were most likely to get users active on the page. Of course, engagement will naturally skew high for some posts that are promoted heavily. However, the Engagement Rate will indicate the percentage of likelihood that people choose to interact with a post, whether it was promoted to thousands of users or only shown to a few. For instance, here we see the third post down in the table had fewer Engaged Users overall but a high Engagement Rate (close to 4%). While there were less engaged individuals, the content had high impact on those that were engaged.

By evaluating what types of content are most likely to engage users, you can plan ahead. This insight allows you to craft content that reflects similar characteristics to what has previously performed well on your Facebook page. You can also re-evaluate posts that you thought may have worked well but didn’t result in much interaction. Be sure to review this data before meeting with your client or boss, possibly using a Notes widget to call out posts that performed especially well or poorly.

Over the past few years, Facebook has been limiting organic reach of posts, so many of your fans don’t see your posts. Now, if you’re getting people to like your brand, you want to make sure that you can keep your messaging in front of those people.

There are a number of ways to attempt to reach more fans, such as cutting back on “salesy” posts, using paid promotion, and getting others to share your content. To monitor how well you’re reaching the people who like your page, add the “Fan Reach” and “Fan Reach Rate” columns to your widget. With the limitations placed on brand exposure, user engagement can also become a key part of the strategy to increase reach.

Here, we can see that even the post with the highest reach only showed up for 28% of fans. If we want to reach more fans, we may need to include some paid promotion to people who like the page in order to ensure they see our content.

Social media has become a key channel for building brand awareness, driving website visitors, and even driving conversions. With all of the metrics on post performance we have access to, Facebook is no longer a channel filled with guesswork and ambiguity. We can set goals and then study the detailed nuances of what works, when and with whom.

With Megalytic’s Facebook integration, reporting processes have become easier too. Use the Facebook Posts Published widget to account for the performance of each post when reporting on your social media marketing efforts. You’ll be able to show overall reach and engagement, as well as segment paid and organic performance. You can also pinpoint messaging that drove the most interest from potential customers, informing your plans for future social media strategy.