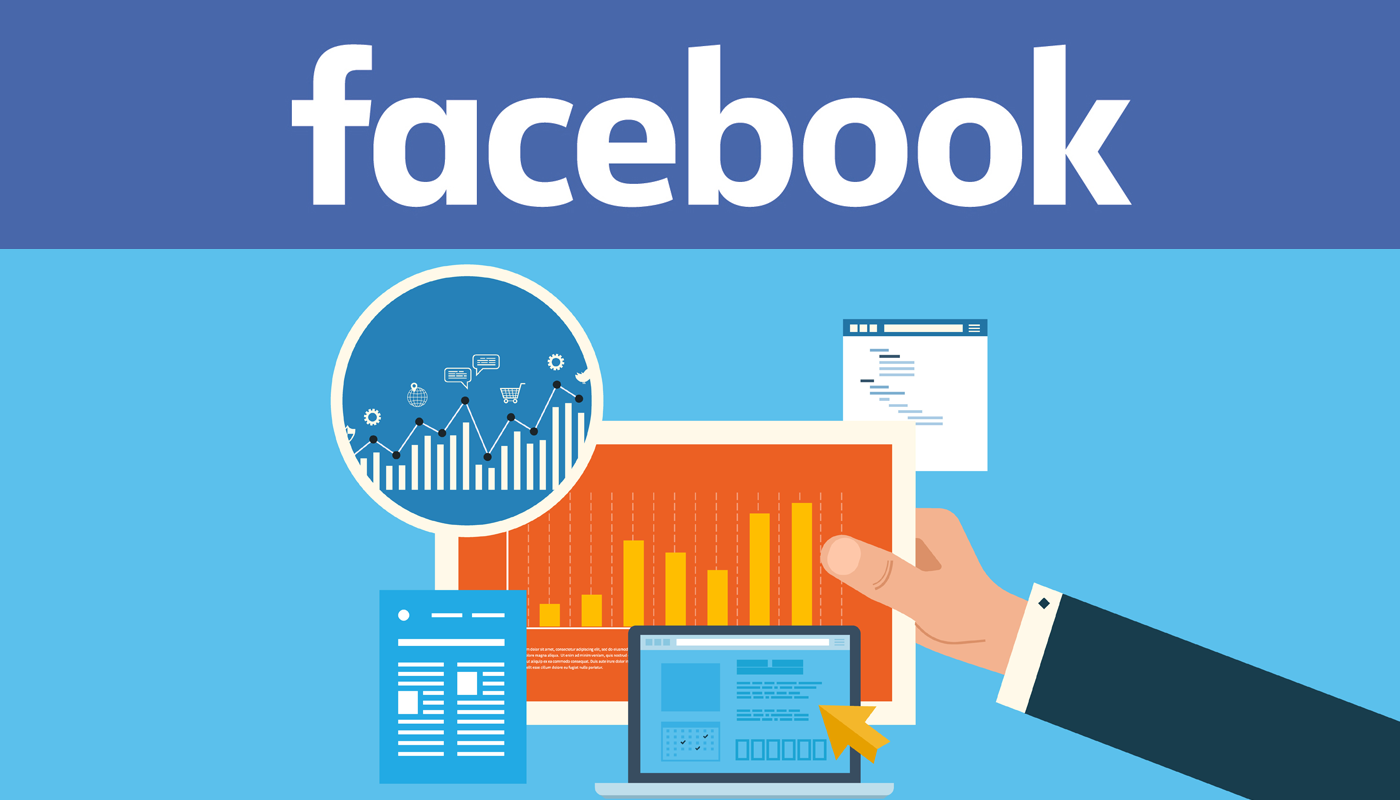 “Like” it or not, Facebook has increasingly become a pay-to-play network for businesses over the past few years. Unfortunately, many business marketers have learned of this limitation the hard way, as they’ve sadly witnessed the dwindling of interactions with their organic posts.
To cope, we can either make faces like the new angry reaction emoji, or we can get on board by getting better at supplementing organic efforts with paid initiatives.
The News Feed algorithm limits the percentage of brand posts that reach users, especially cutting down on showing sales-specific posts. Out of every thousand users who like your page, perhaps only 5-10 (or 0.5% - 1.0%) of those users are likely to see any one organic post.
As a solution, Facebook offers the chance to use Facebook advertising to promote posts. Obviously the necessity of spending money to do something you could formerly do for free can be frustrating. Fortunately the tradeoff is the opportunity Facebook Advertising offers to highly segment your target audience by specific demographic parameters.
Today, a smart social media marketing plan should also include a budget for paid promotion. Check out our primer on building ads Using the Facebook Ads Manager.
In this article, we’ll talk about ways to integrate paid promotion with your organic social posting strategies in order to achieve the maximum reach to your target audience. In addition, we’ll address some potential concerns with images for ads. 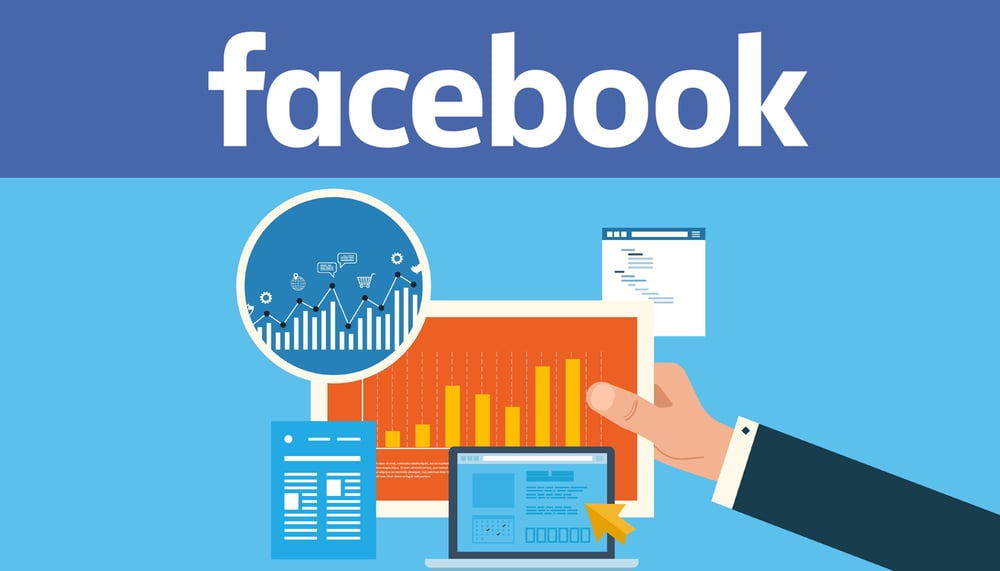 Facebook’s sponsored post ad format tends to be the most common type of ad you see while browsing the News Feed. For the most part, it looks like a standard post you’d see from a brand page, including an image, post copy and a website link with a brief description. Only the “Sponsored” designation at the top of the post indicates that this is a paid placement. 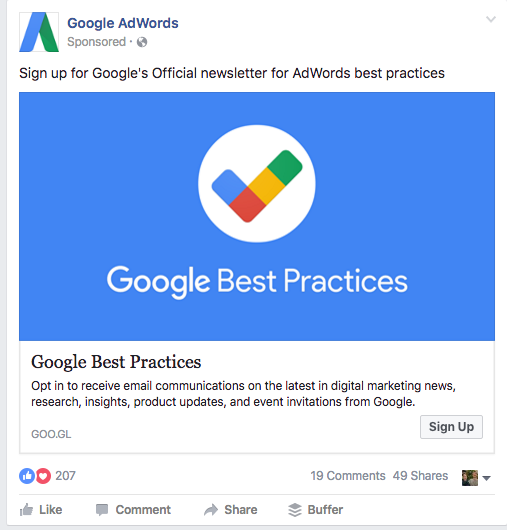 You likely lay out a social posting strategy for a month, including a schedule for, perhaps, 1-3 posts per day. You probably don’t want to spend ad money on every post; if you’re simply sharing a relevant link from a site unrelated to your brand, your money would be better spent driving traffic to your own site.

As part of your planning process, select posts for promotion that are strongly goal oriented for your marketing strategy. In other words, put budget toward posts that most directly benefit you. This could mean links to your blog, which help to generate brand awareness, promotions of sales offers, which can generate revenue, or even posting a newsletter sign up or ebook download that comes with an email acquisition feature, which can be worth an ad investment because it supports other digital campaigns.

Many people make the mistake of viewing Facebook Advertising as simply “paying for more views.” But it’s so much more than that. Yes, there’s an element that involves the ability to cast a wider net. But there’s also the opportunity to cast a better net.

Ultimately, you should use advertising as an opportunity to reach a set demographic that is not ordinarily seeing your posts. As a key to success, don’t simply hit the “Boost Post” button. Use the Facebook Ads Manager to define a deliberate, tightly-targeted audience.

For instance, let’s take a charter school wants to promote its kindergarten program. Instead of promoting posts to everyone in the local area, wasting ad impressions on 40-year-old men with no kids, we can define a more specific group of people for the sponsored post. Here, we’ve added three types of targeting to reach those most likely to be parents of potential kindergarteners:

By spending budget promoting a benefit focused, action oriented post to a highly targeted audience we can get the most from paying for an ad. The advantage is strongest when you pair putting the right message in front of the right people with an attempt to illicit a distinct action. In this case it’s enticing the user to visit a page on a kindergarten program, but this principle applies with specific goals across the board.

While building arbitrary likes should never be the goal of a campaign, a minimal ad spend can help to attract likes from a highly targeted audience. Sponsored posts will contain an option for people who don’t already like a page to like it directly from an ad, as in the example below. 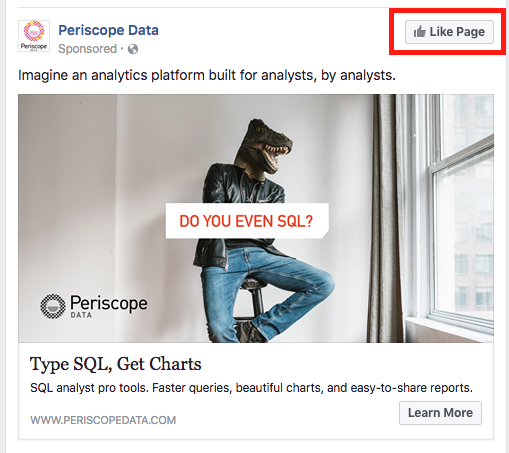 In addition, you can also set up an ad format specifically dedicated to promoting likes. The key, as with any other type of advertising, is to make sure you’re targeting a fine-tuned audience that fits your ideal demographic. As you build your likes, you’re then building the pool of people who can be exposed to your organic posts. Even though organic content only reaches a small percentage of your existing likes, a larger volume of likes will result in a larger pool of people to see those posts.

For local businesses, Facebook offers incredible opportunities to promote events, from grand openings to school open houses. By creating an event page, businesses can encourage people to R.S.V.P. directly through Facebook, with their attendance showing up to friends. 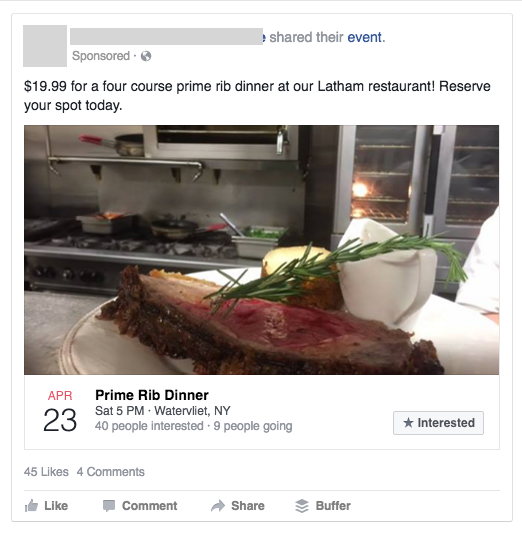 When people see an ad, they’ll also see how many others have responded to the event as “interested” or “going.” As more people respond, their friends are eligible to see the event both through both paid and organic targeting. You can plan your organic posts leading up to the event to coincide with your paid strategy, structuring both to drive people toward the event page.

Anyone who’s spent any time creating ads on Facebook has likely run up against the rules regarding text in images. Until recently, Facebook disapproved any ads with images containing more than 20% text. Often, this rule seemed arbitrary enforced, with some images squeaking through approval with more text and some images, which appeared fine, getting disapproved for something like text in a logo.

In June, Facebook confirmed rumors that the 20% rule was being dropped. However, even though images containing excessive text will now be approved, Facebook still limits their reach. Also, any image with too much text will still earn a warning notification from Ads Manager. For instance, see this email that was received in response to one text heavy ad after the 20% rule update.

Now, if you’ve spent a fair amount of time on Facebook advertising, you may be conscientious of the 20% rule when setting up ad-specific posts. However, when picking organic posts to promote, you may not so readily think about this issue. Facebook still enforces the same regulations over an organic post that you decide to promote, because the action of "boosting" makes the post an ad. If you’ve already put up a post that you now want to promote, your best option is likely to re-create the post, as an ad-only post, using a new image.

Even as other social networks have become more popular, Facebook has retained the attention of a majority of the population. To leverage that power, businesses should have a clear social marketing strategy for Facebook. That plan should include organic posts and a budget for paid promotion to help maximize results and target specific audiences.

Take a closer look today at your organic social posting efforts and consider how you can best integrate Facebook Advertising. Think about your most important messaging, determine your actionable goals, and use paid ads to give those important aspects of your brand the widest possible social reach. Organic Facebook efforts and paid Facebook efforts both benefit when they are part of a conscientiously integrated plan.

Understanding the Referral Report in Google Analytics
11 March, 2016 | Blog
Digital marketers spend a lot of time focused on PPC and SEO campaigns in order to drive desirable traffic to a website. The phrases we’re ranking for and bidding on get meticulous attention, so much so that we often forget about some of the other ways that visitors find us.

In this article, we’ll review how to look at referral reports in Google Analytics, and some of the many ways to use that data to better inform your web marketing decisions.
END_OF_DOCUMENT_TOKEN_TO_BE_REPLACED
Understanding Direct Traffic in Google Analytics
14 April, 2015 | Blog
When the client first came to you, you talked up the value of Google Analytics. You emphasized the importance of seeing where your traffic was coming from. You went on and on about how Google Analytics can show traffic sources to pinpoint whether people came from search, social media or a specific site referral, and how valuable this data was. You sold them on it, so much so that your client looked forward to receiving that first report, the magical day when they would finally understand where visitors were coming from.
But then the report came, and it looked like this:
It showed that 10% of your client’s traffic came from “(direct)/(none)”. What does this label mean? How do you explain Direct traffic to your client? Better yet, how do you explain “none”?
Let’s take a closer look at understanding Direct traffic in Google Analytics and how we can address it with clients.
END_OF_DOCUMENT_TOKEN_TO_BE_REPLACED
How to Share Instagram Access with Your Agency
1 August, 2018 | Blog
There are a lot of reasons why you might want to share access to your company's Instagram account with your digital marketing agency.
Instagram advertising is handled through Facebook Ads. So, you can achieve the first two objectives by sharing access through Facebook Business Manager. In the third case, you will need to share your company's Instagram account password with your agency or else give them access through a third-party tool like Hootsuite or Buffer.
We've put together this blog post to walk through the steps in each scenario and provided screen shots to make it easy to follow. So, if you are ready to begin sharing Instagram access with your agency, but haven't known how to get started, you've found the right resource.
END_OF_DOCUMENT_TOKEN_TO_BE_REPLACED
More Blog Articles