Five Ways to Use Video in Online Advertising 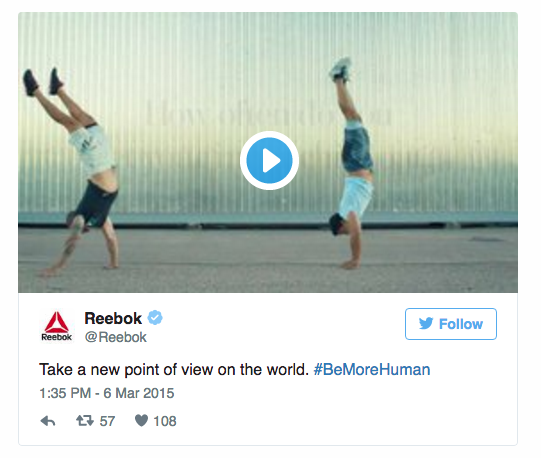 From television, to movies, to the Internet, video may have killed the radio star, but it gave birth to a new generation of media. In the last several decades, video has become a critical component of entertainment, education and, of course, advertising.
Why? Because it works.
Video allows you to grab users’ attention by engaging them both visually and audibly. It’s also in high demand, people want to consume video content and actively seek it out. YouTube users are watching over 5 billion videos every day.
Further, it’s an effective multi-platform media. People aren’t just watching videos on their phones; 2 out of 3 YouTube viewers say they watch YouTube on a TV screen, according to Google’s research. You can truly reach people across all devices, from the smallest phone to the largest TV, with video ads.
But integrating video into online advertising strategy entails much more than simply uploading the same brand spots used on traditional TV. In this article, we’ll cover five ways that you can use video in your online advertising efforts to supplement campaigns running via other channels. 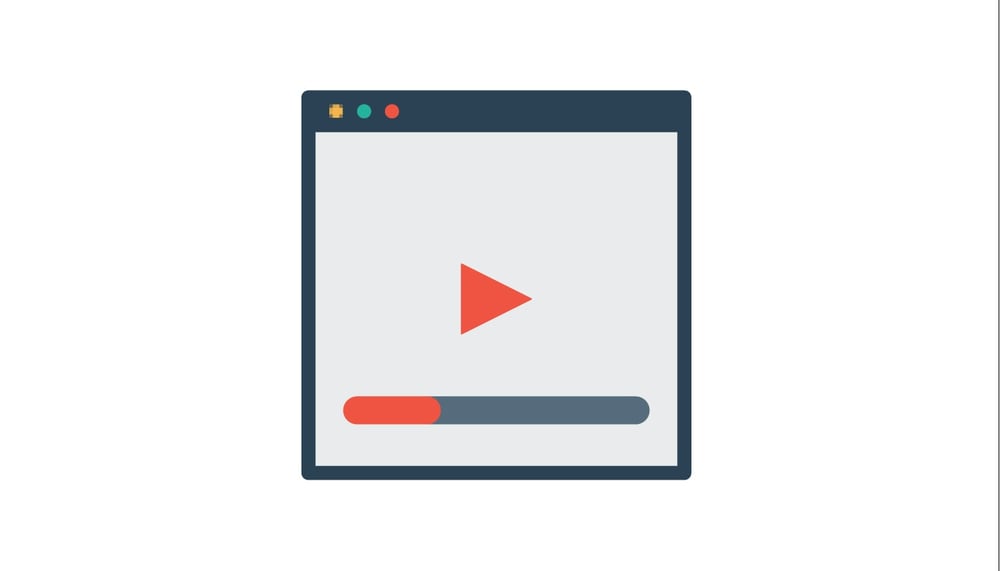 In-Stream videos are probably the first category that you think of when considering YouTube ads. These are set up via AdWords, and play primarily as pre-roll ads before the main videos people are watching, with the option to skip after 5 seconds if the ad is 30 seconds or longer. Ads contain a link to your site and can be targeted several ways:

When using the In-Stream format, keep in mind that the average user won’t want to watch a lengthy ad before seeing their favorite cat video. Don’t run your 3-minute long service overview video as an ad in this format, since most people will skip as soon as they have a chance. Instead, use a brief 15 second ad to get a message across in an unskippable format.

You can also run a slightly longer video (30 seconds to a minute--not too long!) but if you choose a longer format, be sure to present your brand or promotion clearly in the first few seconds before the user is permitted to skip. Since you don’t have to pay when the video is skipped before 30 seconds, you essentially get free branding for the period of time it is played.

Also, be sure to include a companion banner, a 300x60 image that displays to the right of the video ad. This extra graphic allows you to clearly communicate a call-to-action associated with your video, driving users to click to your site.

YouTube also offers Video Discovery ads, which allow you to promote videos in search results and alongside other videos. However, at the time of writing, this ad format is on hold due to AdWords investigating brand safety issues. These are slated to be back up and running by the end of Q2 2017 with safeguards in place to ensure that ads don’t show up next to objectionable content.

Google AdWords also offers an option for 6-second, unskippable, bumper ads on YouTube. However these are billed on a CPM (cost per thousand impressions) basis, instead of per view. This format allows you to put an extremely brief message in front of users without requiring any action on their part, creating brand awareness for you while still allowing users to quickly get to their intended videos. You can also use companion banners with bumper ads to drive people to a website.

If you’re promoting an ecommerce site on YouTube, you can drive purchasers directly from videos by featuring products right alongside videos. This placement is highly visual, with imagery of products and pricing provided within the ads. For example, you could show blenders next to a video about making smoothies.

However, this format requires that you have a Google Merchant Center account configured with a product feed from your site. For more details, see Google’s walkthrough on creating a TrueView for a shopping campaign. But if you sell products on your website, it’s likely well worth the time to set up this account.

Facebook has become a prominent medium for video consumption. Research indicates that users find posts with video more engaging, and Facebook’s News Feed algorithm tends to have a bias toward showing videos. As people scroll through their feeds, they’ll see videos begin to play automatically.

In turn, the advertising platform allows you to promote videos at just a few cents a view, with options to target on an incredibly granular level. You can also promote standard posts containing video, including a link to a landing page to promote an offer. 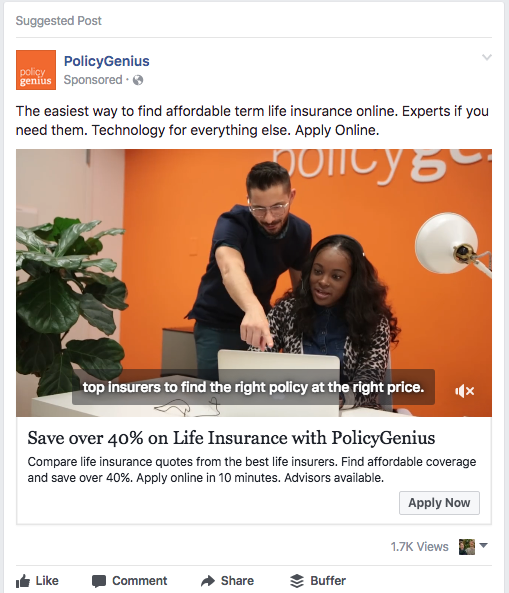 When running video ads on Facebook, note that 85% of views occur without sound turned on. Design videos in a format that’s visually appealing and understandable, even while running silently. Since you can’t get viewers’ attention with sound, the beginning of the video should be more than just a basic slate of text and include enough action to grab people’s attention. For instance, consider recipe videos that walk through step-by-step creation of dishes with text for each step. Also, take advantage of Facebook’s option to automatically create subtitles; you can also upload your own subtitles for greater accuracy.

Other new features to note include options to advertise within Facebook and Instagram stories directly from the Facebook Ads Manager interface. These ads can reach users “in the moment” of experiencing their connections’ lives.

Twitter also allows you to promote video ads on a platform that people often turn to for real-time news and updates. As with Facebook, you can drive awareness at just a few cents per view. In addition to standard audience interest targeting, Twitter offers a few unique options for precise targeting, including keywords (target people tweeting about a particular event, topic, or hashtag) and profiles (target people similar to those who follow select brands). Along with a video, you can include a call-to-action linking users to a website.

If you have video assets to promote online, take advantage of the many channels for promoting videos and ultimately driving people to complete actions. Get specific with targeting to reach people based on what they are already watching or tweeting about. Test different formats and video lengths to see what drives the best response. Ultimately, use video in conjunction with other forms of online marketing, such as paid search, SEO and email marketing, to complete a full-circle digital strategy.

Understanding Direct Traffic in Google Analytics
14 April, 2015 | Blog
When the client first came to you, you talked up the value of Google Analytics. You emphasized the importance of seeing where your traffic was coming from. You went on and on about how Google Analytics can show traffic sources to pinpoint whether people came from search, social media or a specific site referral, and how valuable this data was. You sold them on it, so much so that your client looked forward to receiving that first report, the magical day when they would finally understand where visitors were coming from.
But then the report came, and it looked like this:
It showed that 10% of your client’s traffic came from “(direct)/(none)”. What does this label mean? How do you explain Direct traffic to your client? Better yet, how do you explain “none”?
Let’s take a closer look at understanding Direct traffic in Google Analytics and how we can address it with clients.
END_OF_DOCUMENT_TOKEN_TO_BE_REPLACED
Evaluating Google Analytics Traffic by Hour & Day
2 June, 2016 | Blog
Remember how your mom told you not to stand too close to the television because it might hurt your eyes?

Google Analytics makes it fairly easy to analyze trends over long periods of time. But it also allows you to stand right in front of that TV, to look at more granular levels of time, right down to the hour.
There’s a better way to get that close to the data, without burning your retinas. We’ll cover how to analyze traffic effectively in today’s post.
END_OF_DOCUMENT_TOKEN_TO_BE_REPLACED
Understanding the Referral Report in Google Analytics
11 March, 2016 | Blog
Digital marketers spend a lot of time focused on PPC and SEO campaigns in order to drive desirable traffic to a website. The phrases we’re ranking for and bidding on get meticulous attention, so much so that we often forget about some of the other ways that visitors find us.

In this article, we’ll review how to look at referral reports in Google Analytics, and some of the many ways to use that data to better inform your web marketing decisions.
END_OF_DOCUMENT_TOKEN_TO_BE_REPLACED
More Blog Articles