Humans are visual creatures. A widely cited statistic states that 65% of the population are "visual learners". No wonder most people would agree with the colloquial wisdom that “a picture is worth a thousand words.”
Google gets that, and that's why there are a number of great ways to use the AdWords Report Editor for both data analysis and client communication.
The Report Editor is perhaps one of the most underused features in AdWords. Rolled out toward the end of 2015, this tool allows you to analyze data within your account in a more visual, and sometimes more granular, view than the main reporting section can produce. In fact, you can even create some reports that previously required an export into Excel.
PPC managers can use the Report Editor in a number of ways to look at performance and use those metrics to optimize campaigns. In this article, we’ll walk through accessing this tool and using it to create some practical, and fascinating, reports. 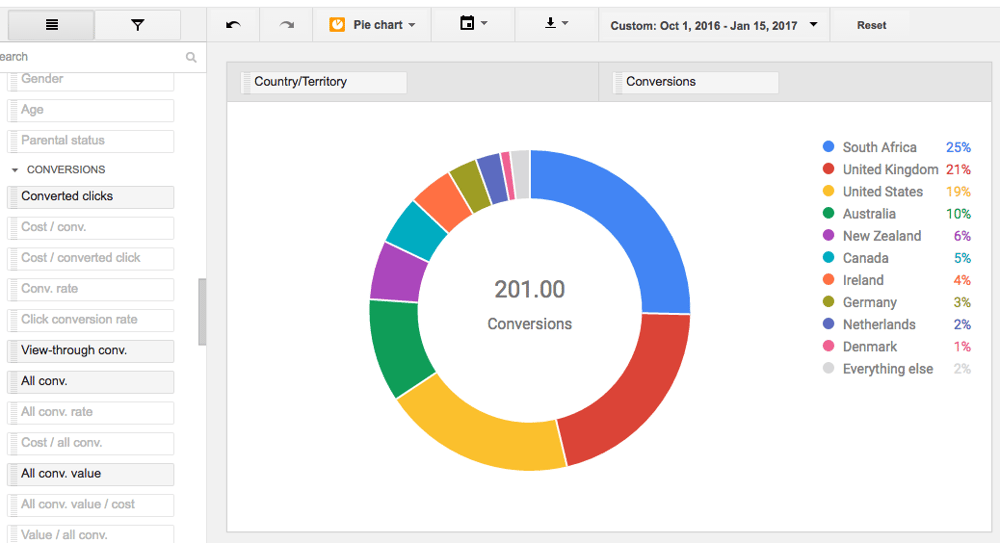 To access the Report Editor within AdWords, click Reports in the top navigation bar. From here, you’ll see a screen where you can create your first report.

From here, you can choose to create a new report via the red “Report” button, or you can select an existing one from the “Pre-defined reports” dropdown. When creating a new report, you’ll choose from four different types of charts: table, line chart, bar chart, or pie chart.

Once you’re in the report builder section, you can select various metrics, dimensions, and targeting criteria to include by dragging them over from the left side. In this example, we’ve built a report showing performance by device at the campaign level.

Use the dropdowns by any metric in the table to filter what shows up in the report. For instance, you may want to only see data campaigns that resulted in one or more conversions. Select the dropdown by “Conversions” and use the field to filter by numbers greater than or equal to 1.

You can also select the “funnel” in the lefthand sidebar to filter by further criteria. In this example, we’ve selected a specific campaign (Search - General) and chosen to show only data from Google Search, excluding search partners.

Measuring AdWords performance by day and hour allows you to pinpoint times when conversions are most likely to happen, as well as highlighting when you’re paying expensive costs for low-converting clicks. The Report Editor can quickly visualize data broken down by time.

The next example breaks down clicks and conversions by hour of day. Here, you can see when the highest volume of people are likely to be searching for your service and converting on your site. From this, we can note that 8 a.m and 4 p.m. appear to be peak times and so a higher bid at these times may help to capture more search activity.

Looking at which regions perform the best will also help you to know where to focus your ad spend and where to pull back. Depending on the scale of a campaign, you should look at geographic on multiple levels: city, metro area, state, and country.

In this example, you can see clicks broken down by country, providing perspective on which countries drive the most traffic. South Africa drives the highest volume, followed by the United States. 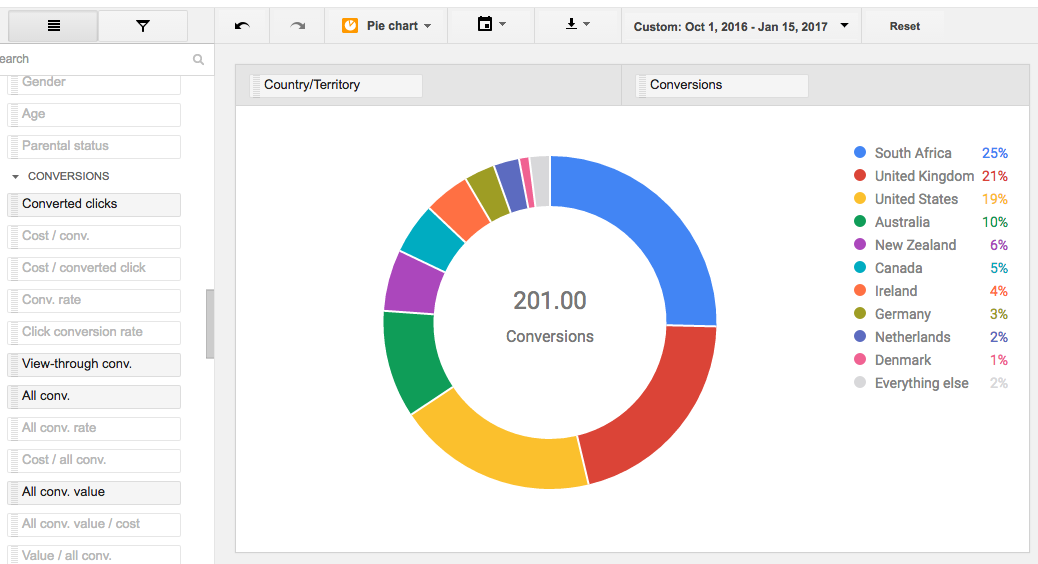 Now, say that we want to dig further into which countries actually drive the best performance, as click volume alone doesn’t tell the full story. We’ll build a table chart including conversion data, using the filter on the “Conversions” column to only show countries that have had ten or more conversions in our timeframe. Finally, we’ll sort by conversion rate to show which countries are most likely to drive leads.

In these results, Ireland now ranks at the top, with the highest conversion rate showing that visitors from here are very likely to sign up for a trial. This also correlates with a lower cost per conversion, shown in the next column. Based on this data, it would make sense to bid higher for traffic from Ireland.

We can also look for costly conversions by sorting in the cost per conversion column. Here, we can see that Canada and Germany have the highest costs per conversion, so bidding down in these countries would be logical.

Using the Report Editor, a line chart can help you see how metrics have risen or fallen over a period of time. Many businesses incorporate call extensions into ads to drive phone calls from searchers; in this example, we compare phone calls and phone impressions over the past several months.

From this data, we can show that phone call volume spiked in early summer, early fall, and winter, correlating with weather trends that make sense for an HVAC company. Warm weather leads to calls for AC repair while cold weather leads to calls for furnace repair. Also, total phone calls overtook phone impressions later in the graph, meaning that people who saw phone numbers were more likely to call.

In the next example, we compare average CPC among campaigns to analyze how much we’ve been paying for traffic over time. We’ve selected key search campaigns from the account to compare.

We can see that the Capital Region campaign spiked up recently, while the Wappingers Falls and Vestal campaigns have been trending downward. Using this report, we can pinpoint campaigns that may need extra attention, analyzing how much of a factor edits, such as bid changes or ad copy adjustments, have affected increases.

Another benefit of the Report Editor is its ability to tie in Google Analytics metrics, if you’ve linked your Analytics and AdWords accounts together. Once you’ve taken that step, you’ll see these metrics, along with the standard AdWords ones, in the list available to add to your report.

In the example above, we’re looking at bounce rate and pages per session for keywords with 10 or more clicks. We’ve also added CTR to show that the highest CTR doesn’t always correlate with the highest engagement.

While the Report Editor isn’t an end-all reporting solution, it provides a number of ways to take a more in-depth dive into AdWords data. If you haven’t yet used this section of AdWords, experiment with creating reports and focusing on different data points to reveal a variety of insights. As you view data in various charts, you may be surprised by what you can take away to help you improve your PPC campaigns.

Understanding Direct Traffic in Google Analytics
14 April, 2015 | Blog
When the client first came to you, you talked up the value of Google Analytics. You emphasized the importance of seeing where your traffic was coming from. You went on and on about how Google Analytics can show traffic sources to pinpoint whether people came from search, social media or a specific site referral, and how valuable this data was. You sold them on it, so much so that your client looked forward to receiving that first report, the magical day when they would finally understand where visitors were coming from.
But then the report came, and it looked like this:
It showed that 10% of your client’s traffic came from “(direct)/(none)”. What does this label mean? How do you explain Direct traffic to your client? Better yet, how do you explain “none”?
Let’s take a closer look at understanding Direct traffic in Google Analytics and how we can address it with clients.
END_OF_DOCUMENT_TOKEN_TO_BE_REPLACED
Evaluating Google Analytics Traffic by Hour & Day
2 June, 2016 | Blog
Remember how your mom told you not to stand too close to the television because it might hurt your eyes?

Google Analytics makes it fairly easy to analyze trends over long periods of time. But it also allows you to stand right in front of that TV, to look at more granular levels of time, right down to the hour.
There’s a better way to get that close to the data, without burning your retinas. We’ll cover how to analyze traffic effectively in today’s post.
END_OF_DOCUMENT_TOKEN_TO_BE_REPLACED
Understanding the Referral Report in Google Analytics
11 March, 2016 | Blog
Digital marketers spend a lot of time focused on PPC and SEO campaigns in order to drive desirable traffic to a website. The phrases we’re ranking for and bidding on get meticulous attention, so much so that we often forget about some of the other ways that visitors find us.

In this article, we’ll review how to look at referral reports in Google Analytics, and some of the many ways to use that data to better inform your web marketing decisions.
END_OF_DOCUMENT_TOKEN_TO_BE_REPLACED
More Blog Articles