How is the website doing this month compared to previous months?
Among the insights readers of your analytics reports are looking for, this is one of the most important. Sessions, Goal Completions, Ecommerce Transactions – whatever the metric – your reader wants to know what those numbers mean and if the site is more or less successful than before. Comparing recent performance with historical data will help readers understand what the most recent numbers are telling them.
The most appropriate comparison period will vary depending on the nature of the business. For example, a rapidly-growing small company probably pays a lot of attention to month-over-month growth, while a seasonal business will be more concerned with comparing against the same period a year ago (year-over-year comparison).
Once you decide what you want to show, how do you determine the best way to show it?
Part I of this series looked at how to visualize time series data. Part II examined segmenting data for a single time period. In this, the final post in our series on data visualization, we examine how to best present data to compare performance across time periods. 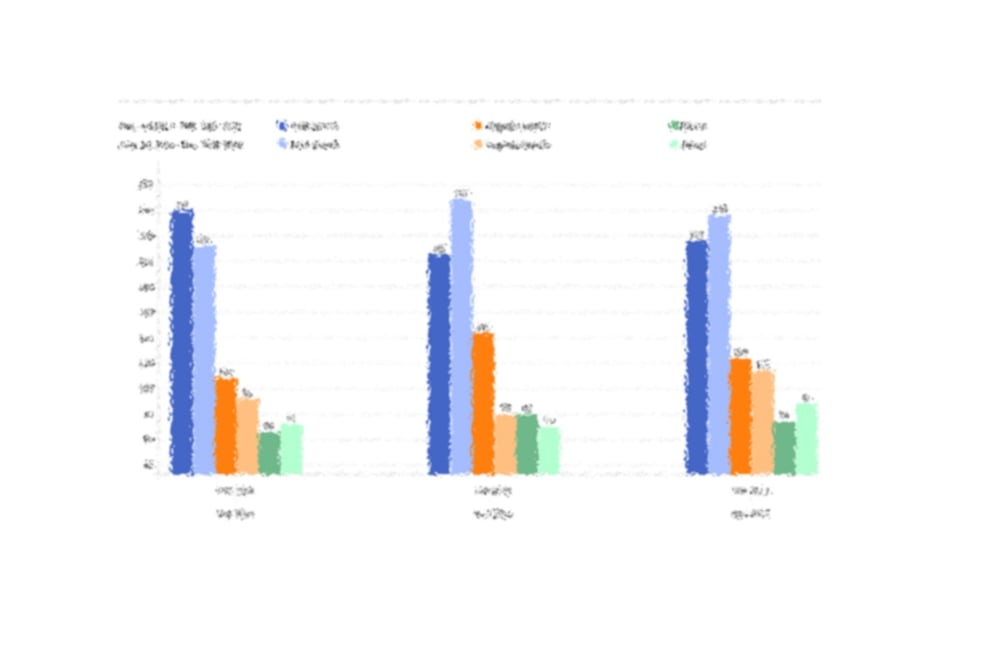 Sometimes, your audience has a small set of critical metrics that need to be called out and evaluated against previous time periods. Often called Key Performance Indicators, or KPIs, these are the topline numbers that everybody wants to see first.

The combination sparkline chart and data points below show how we like to present KPIs with comparisons to previous date ranges. 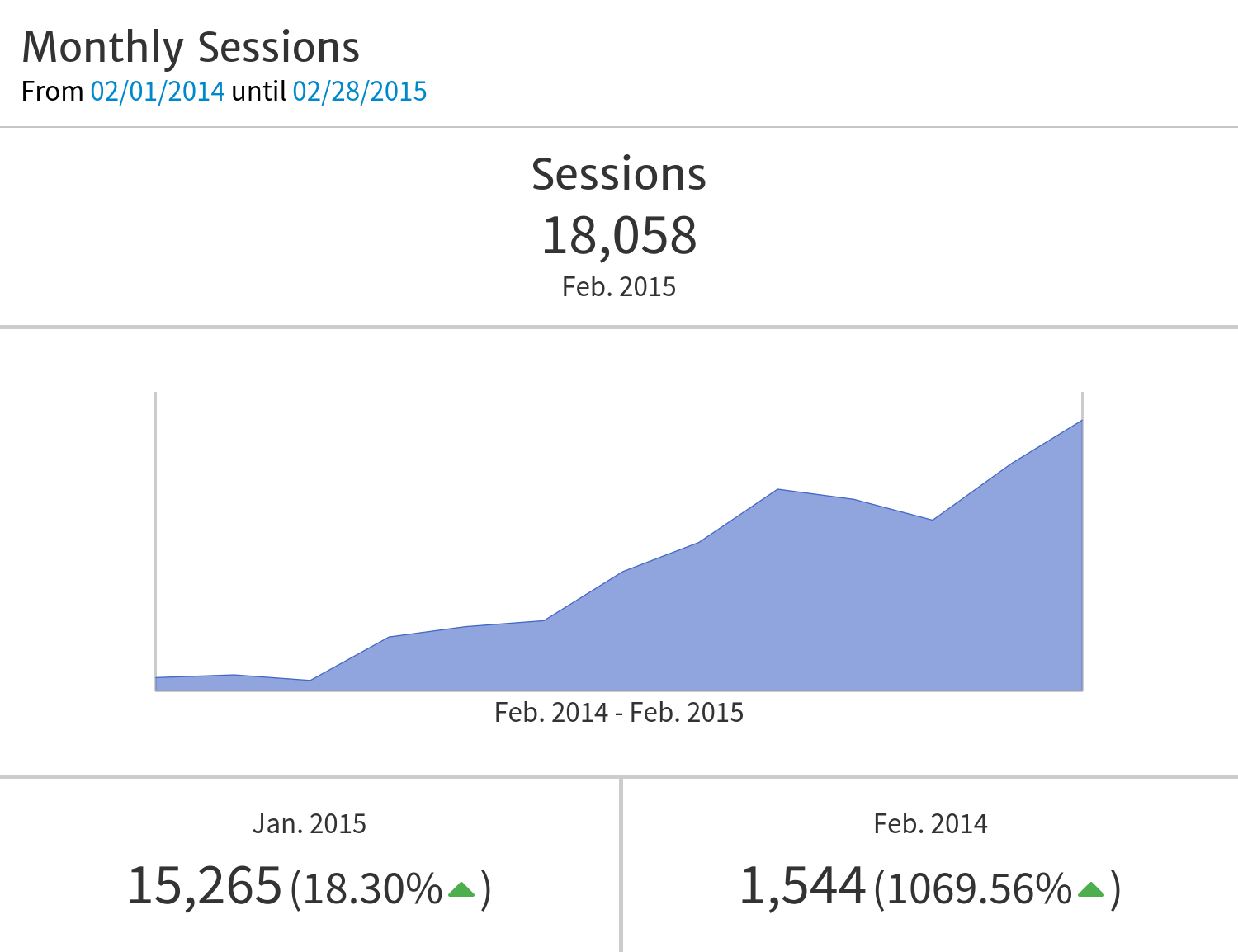 In this KPI widget representation, the key metric for the current month is shown at the top – 18,058 Sessions for February 2015. In the lower left corner is the first comparison – 15,265 Sessions for January 2015. Note that the percentage increase, 18.30%, is shown in parentheses along with a green triangle indicating an increase. Similarly, the second comparison, with the same month from one year ago, is displayed in the lower right hand corner.

The sparkline chart provides context to help the reader see the general trend of the KPI over time. In this case, it is clear that the Sessions metric has grown considerably over the last year; we also see this from the 1069.56% increase indicated in the year-ago comparison. However, for many readers, the chart conveys the magnitude of the increase more effectively than a percentage.

If your readers do not need the chart, and are just looking for the numbers; or if you are trying to save space and pack your data tightly into the page, you can leave the sparkline chart out and include several KPIs on the same row.

In some situations, you may want to simplify this further and only show a single comparison – vs last month, or vs one year ago. This allows you to present the data in even less space and focus the reader’s attention on a single period comparison.

Here, we are showing the KPIs for February compared against January only (month over month change).

KPIs, as shown above, are usually aggregate numbers. For example, we present total Sessions as the KPI, rather than looking at Sessions broken down by, say, acquisition channel. But, as we discussed in Part II of this series, segmenting data by dimensions is the key to deeper insights.

In addition to segmenting the data, we also often need to show the relative performance of the segments across time periods. For example, it is helpful to know that the Organic Search segment is bringing in the most traffic, but it is even more useful to know that it’s share of total traffic has increased since last month (or vs the same month last year).

The table below shows how you can present a comparison between date ranges for segmented data. It shows the Sessions, segmented by Acquisition Channel, for February 2015 vs January 2015.

Notice that we have included columns indicating the total size of the change (Change) and the percentage increase or decrease (% Change). From this table, we can see that Organic Search is the largest contributor of Sessions, and we can also see it has grown 25.74% since last month – which is the second fastest growth (after Referral).

If you want a more visual representation of this data, you can use a bar chart rather than a table. 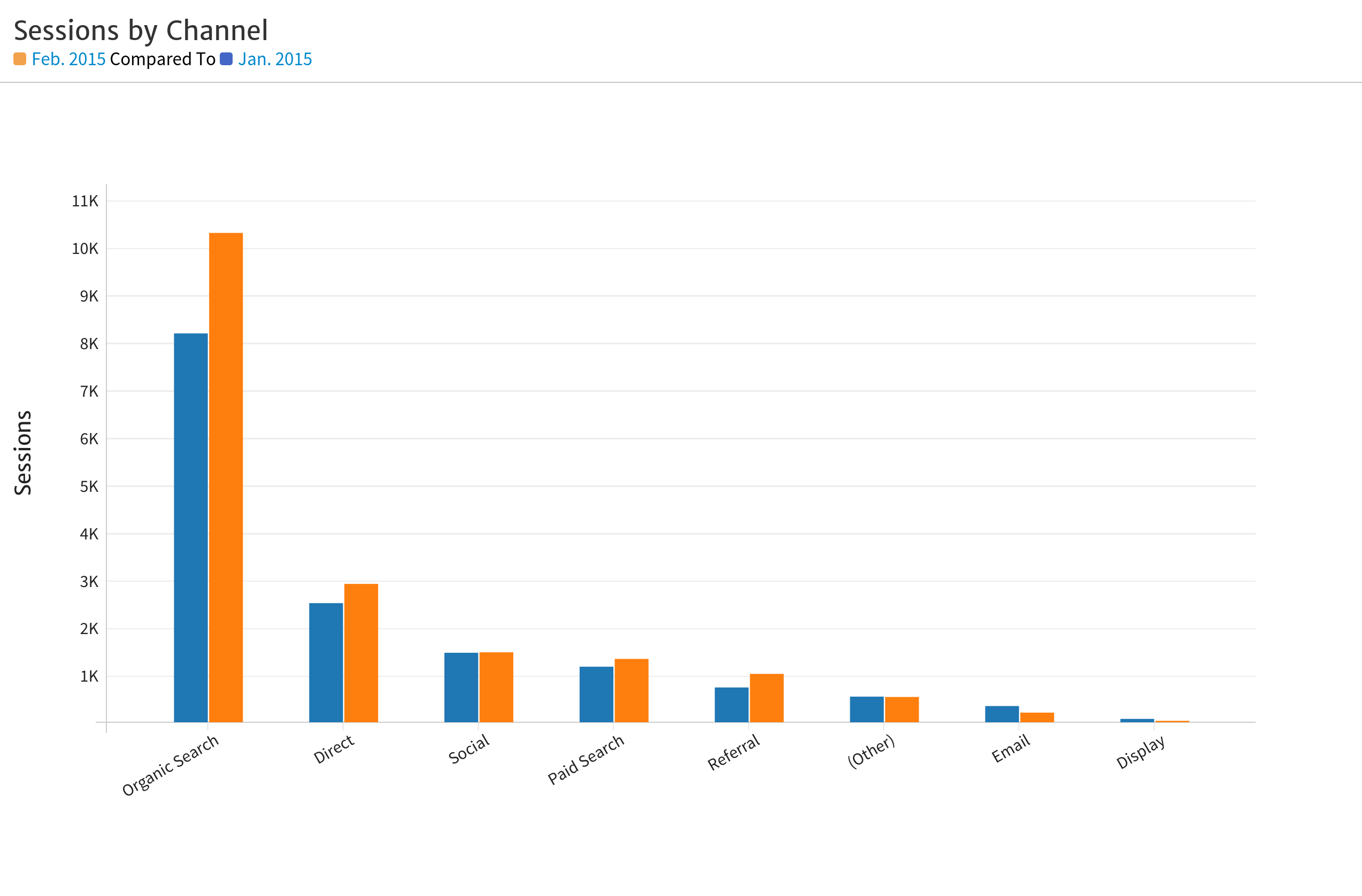 Here, the blue bars represent January and the orange bars represent February. This visual representation makes it very clear that Organic Search is the largest contributor, and that is has grown significantly since last month. However, compared with the table, it is harder to discern some of the details – such as the fact that Referral traffic has actually grown more than Organic in percentage terms.

As we’ve said before, there is rarely one “best” way to represent data. In this case, your choice should depend on the key point you want to make with your audience. If you want to emphasize the importance and growth of the Organic channel, then the bar chart is more effective. However, if you want to call out the rapid growth of the Referral channel, use the table comparison with text commentary to draw the reader’s attention to the increase in Referral traffic.

Sometimes, you may notice a particular pattern when you are looking at time series data, and you want to compare that with previous periods to see if it is a recurring pattern. For example, you may notice your website is getting more new subscription signups at the beginning of the month than at the end of the month. You may want to show that this pattern happens every quarter, and that the total number of signups has also grown from quarter to quarter. In this situation, you could use a chart like the one below. 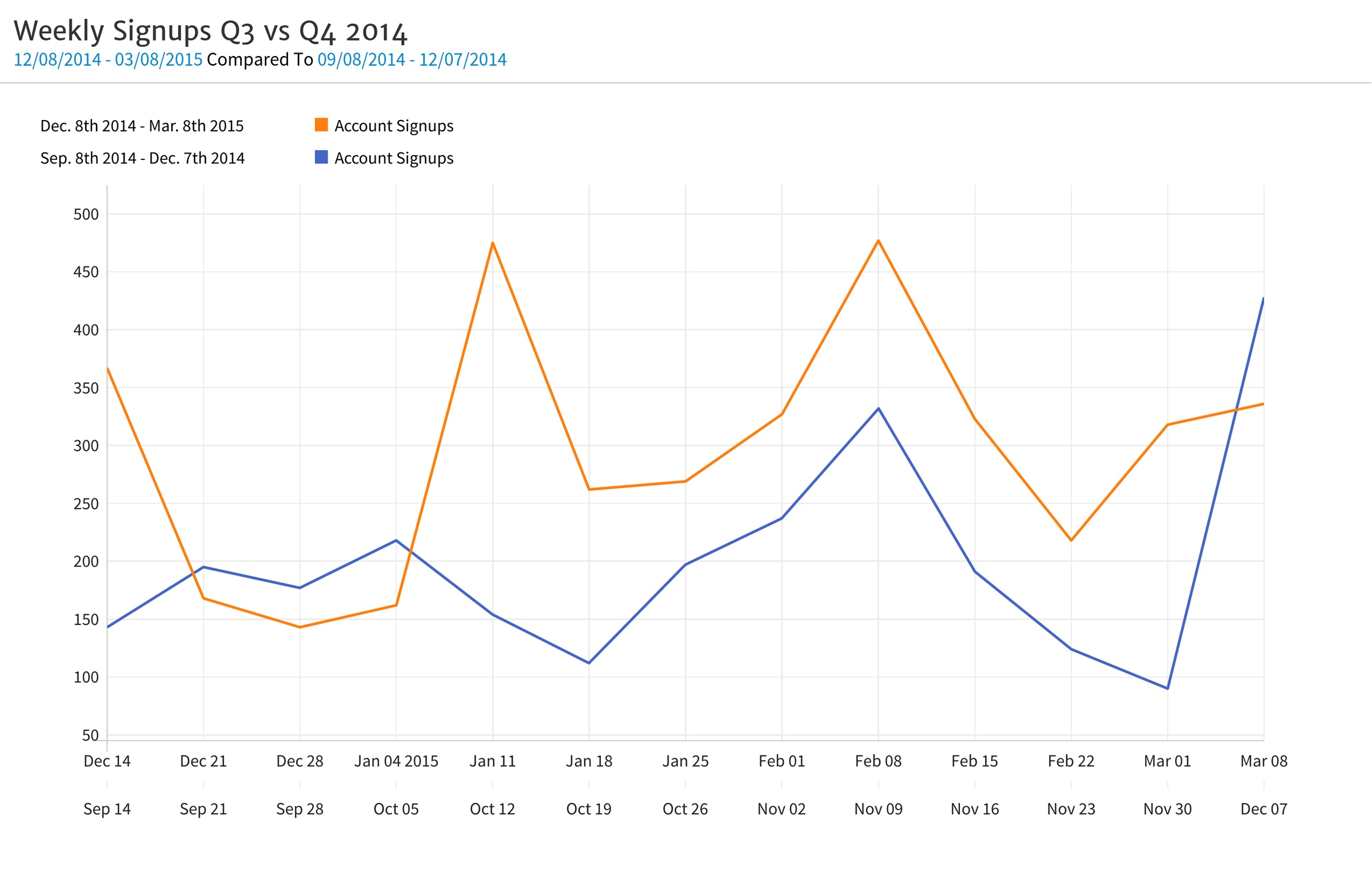 In this chart, the orange line shows the weekly signups during Q4. We notice peaks at the beginning of each month – January, February, March – as well as troughs at the end of each month – December, January, February. The blue line shows weekly signups during Q3. Here, we also see the pattern of more signups at the beginning of the month and fewer at the end.

What is useful about this chart is that, not only can we see the common pattern in signups in Q3 vs Q4, but we can also see that signups are higher in Q4 – the orange line is shifted up from the blue line showing signups in the 250 – 300 range, where as the Q3 signups look to be in the 150-200 range.

The kind of insight provided by this style of date comparison can be helpful in setting expectations. It shows us, for example, that it is better to compare data against the same period in a previous month to gauge how well signups are doing. If your sales team were to only compare vs the previous week, they would be getting depressed in the second half of the month, not realizing that signups dip at the end of every month!

When comparing website performance against prior periods, there are a variety of options for displaying the data. In the simplest case, you may want to show the value of a KPI vs a prior period. Adding a sparkline to such a comparison can help provide context in which to evaluate the increase of decrease. Beyond simply looking at KPIs, you can provide period comparisons for segmented data and for time series data. As always, the data visualization style you choose should depend primarily on the insight that you need to communicate.

This is Part III of a three part series. Miss the first two posts? Catch up!

Understanding Direct Traffic in Google Analytics
14 April, 2015 | Blog
When the client first came to you, you talked up the value of Google Analytics. You emphasized the importance of seeing where your traffic was coming from. You went on and on about how Google Analytics can show traffic sources to pinpoint whether people came from search, social media or a specific site referral, and how valuable this data was. You sold them on it, so much so that your client looked forward to receiving that first report, the magical day when they would finally understand where visitors were coming from.
But then the report came, and it looked like this:
It showed that 10% of your client’s traffic came from “(direct)/(none)”. What does this label mean? How do you explain Direct traffic to your client? Better yet, how do you explain “none”?
Let’s take a closer look at understanding Direct traffic in Google Analytics and how we can address it with clients.
END_OF_DOCUMENT_TOKEN_TO_BE_REPLACED
Understanding the Referral Report in Google Analytics
11 March, 2016 | Blog
Digital marketers spend a lot of time focused on PPC and SEO campaigns in order to drive desirable traffic to a website. The phrases we’re ranking for and bidding on get meticulous attention, so much so that we often forget about some of the other ways that visitors find us.

In this article, we’ll review how to look at referral reports in Google Analytics, and some of the many ways to use that data to better inform your web marketing decisions.
END_OF_DOCUMENT_TOKEN_TO_BE_REPLACED
Evaluating Google Analytics Traffic by Hour & Day
2 June, 2016 | Blog
Remember how your mom told you not to stand too close to the television because it might hurt your eyes?

Google Analytics makes it fairly easy to analyze trends over long periods of time. But it also allows you to stand right in front of that TV, to look at more granular levels of time, right down to the hour.
There’s a better way to get that close to the data, without burning your retinas. We’ll cover how to analyze traffic effectively in today’s post.
END_OF_DOCUMENT_TOKEN_TO_BE_REPLACED
More Blog Articles