Building an Ecommerce Report in Megalytic

You need to produce a report showing your website’s Ecommerce performance. As long as you have Ecommerce tracking set up in Google Analytics, you’ll have transaction and product data showing up in your account. But, how do you use that data to pull a report together, the kind of report that tracks not only the revenue earned on the website but where that revenue is coming from?
You could cut and paste from Google Analytics. Or, you could export data from Google Analytics to Excel, build your own charts and tables, and pull everything together into a report in MS Word. But, that’s a lot of tedious work. And then, you’ll just have to do it all over again next month.
Luckily, Megalytic allows you to put together Ecommerce reports quickly and easily using widgets specifically designed for Ecommerce reporting. And once the report is created, you can easily keep it up to date each month with just a few clicks.
Go ahead, breathe that sigh of relief.
In this post, we explore the Ecommerce widgets in Megalytic and show how you can use them to construct a report.

Create a Blank Report and Open the Widget Library

To get started creating your Ecommerce report, simply click on “Create a New Report” on the left side of your dashboard. 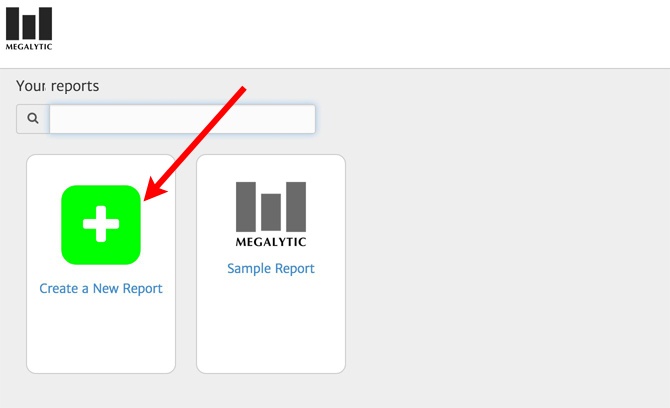 Select “Blank Report” as the template to start with a fresh canvas and begin building your report from scratch. This will also open the widget library in the left hand side of your browser. In Megalytic, reports are created by dragging widgets from the library on the left into the report canvas on the right.

Megalytic offers a variety of widgets to help digital agencies, marketers and business owners with reporting. To show only Ecommerce widgets, we can search for “ecommerce” in the search bar in the upper right corner of the widget library.

One of the important questions to answer in an Ecommerce report is to understand what acquisition channels drive revenue. Does traffic from paid search contribute more than referral traffic – or vice versa?

The Ecommerce by Channel widget shows the traffic sources that resulted in online purchases. In the example below, this widget shows that Organic Search provides the most transactions and revenue, while referral traffic has a higher Average Order Value ($527.88 vs $389.63). 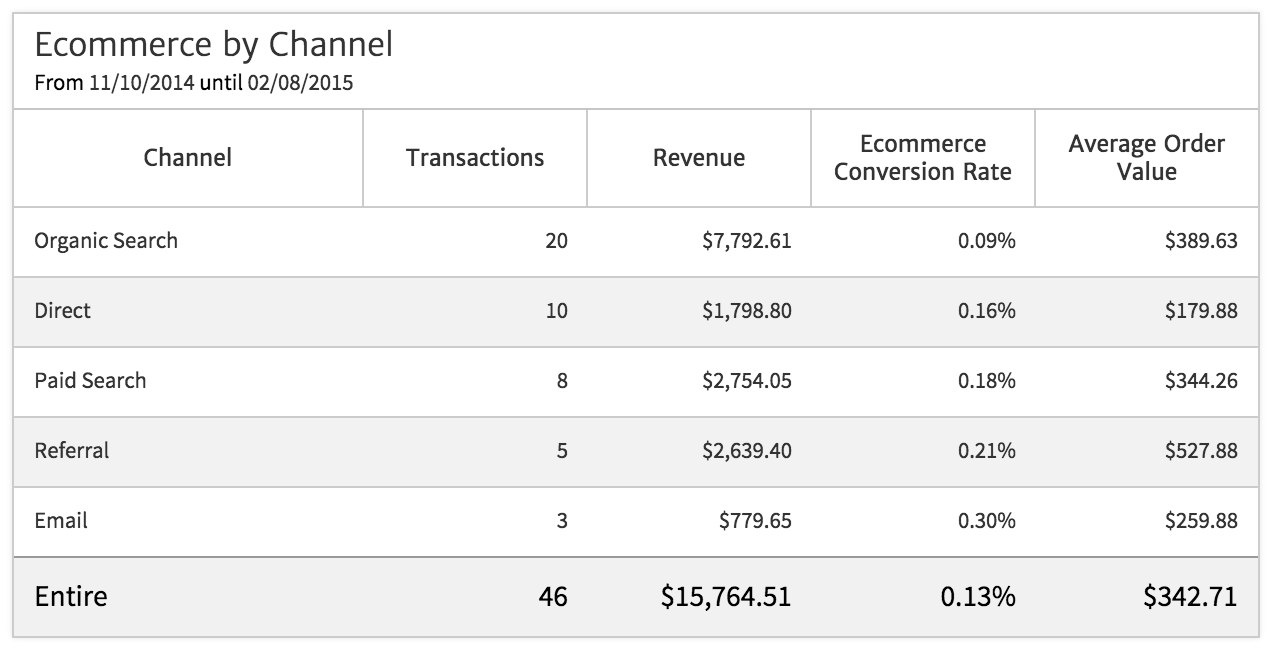 Here, you can see that Campaign A produces by far the most revenue. Interestingly, Campaign B, which produces the second highest number of transactions, has a much higher Per Session Value. The Per Session Value metric can be used to estimate the value of the traffic from a particular campaign. In this case, it tells us the average Session from Campaign B produced $0.73 in revenue, while the average Session from Campaign A produced $0.38 in revenue.

For this we can conclude that Campaign B generates more valuable traffic and that it may be worth shifting some resources from Campaign A to Campaign B. Of course, that judgment depends on the cost of Campaign B, as well. In general, you should aim to spend less per Session for traffic from each campaign than you receive in revenue (the Per Session Value). 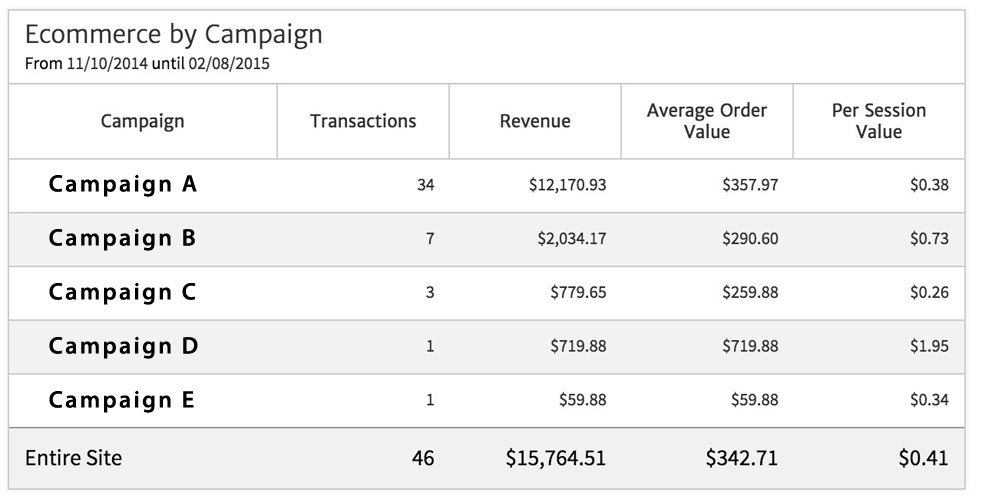 In addition to understanding what acquisition channels and campaigns are driving Ecommerce, it is often helpful to have a look at the geographic distribution of transactions and revenue.

Megalytic’s Ecommerce by Geography widget enables you to report on both revenue and transactions at a range of geographic levels from Country, to Region, to City. The example below shows Revenue broken out by the Top 10 countries.

Like all Megalytic widgets, the Ecommerce by Geography widget can be customized. For example, if you want to look at transactions instead of revenue, click on the gear icon in the upper left corner to open the Widget Editor. Then select “Transactions” from the Metric selector.

You can customize the widget further to focus on a specific geographic region. For example, if you wanted to look at the top states in the USA, you would select “Region” from the Dimension selector, and then United States from the Filter. 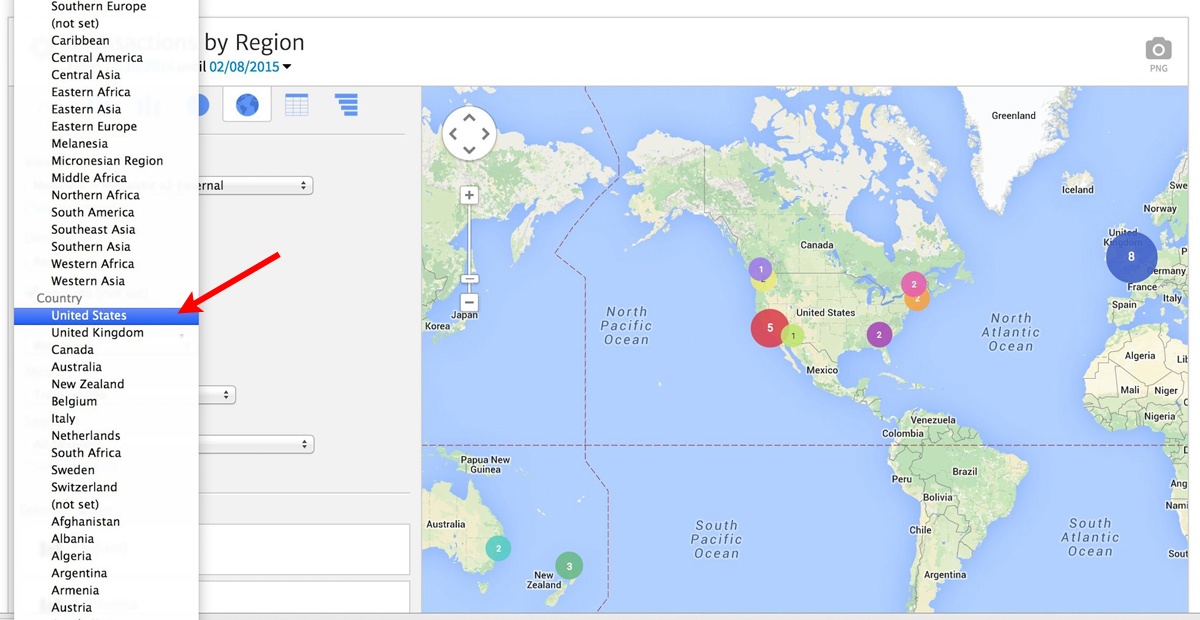 The resulting chart now provides a snapshot of transactions, rather than revenue, and is focused in on the United States. 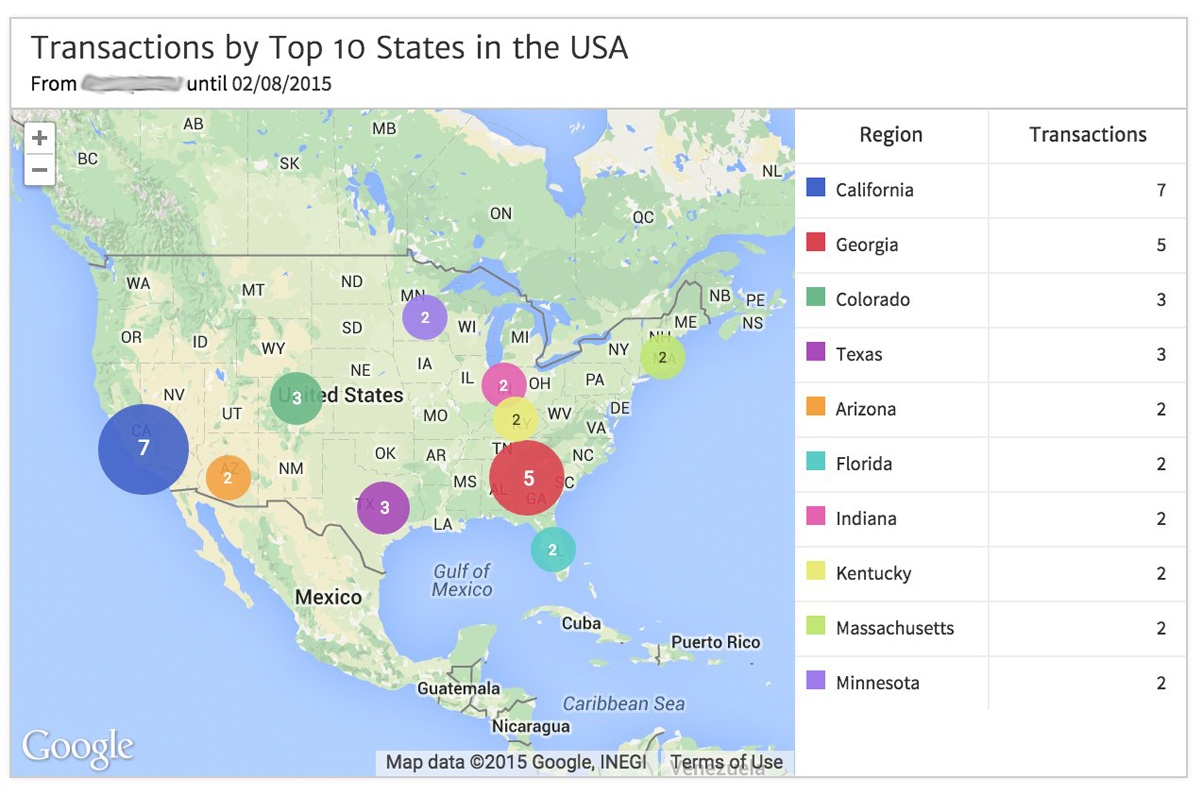 Maps can be a great way to visualize data, but sometimes your audience will want to see other representations of geographic data, such as tables or bar charts showing the top producing locations. Megalytic widgets are flexible and enable you to easily change the way that you present data – from map, to table, to line, bar, and even pie charts.

The map above showing the Top 10 states is useful, but suppose that you want to provide your audience with a full list of the states contributing to Ecommerce revenue? And suppose you want to include more that one metric – maybe looking at Revenue, Transactions and Average Order Value across all states?

In that case, you would want to transform the geographic representation from a map into a table. To do that, again, click on the gear in the upper left corner to open the widget editor. Then click on the Table chart type. 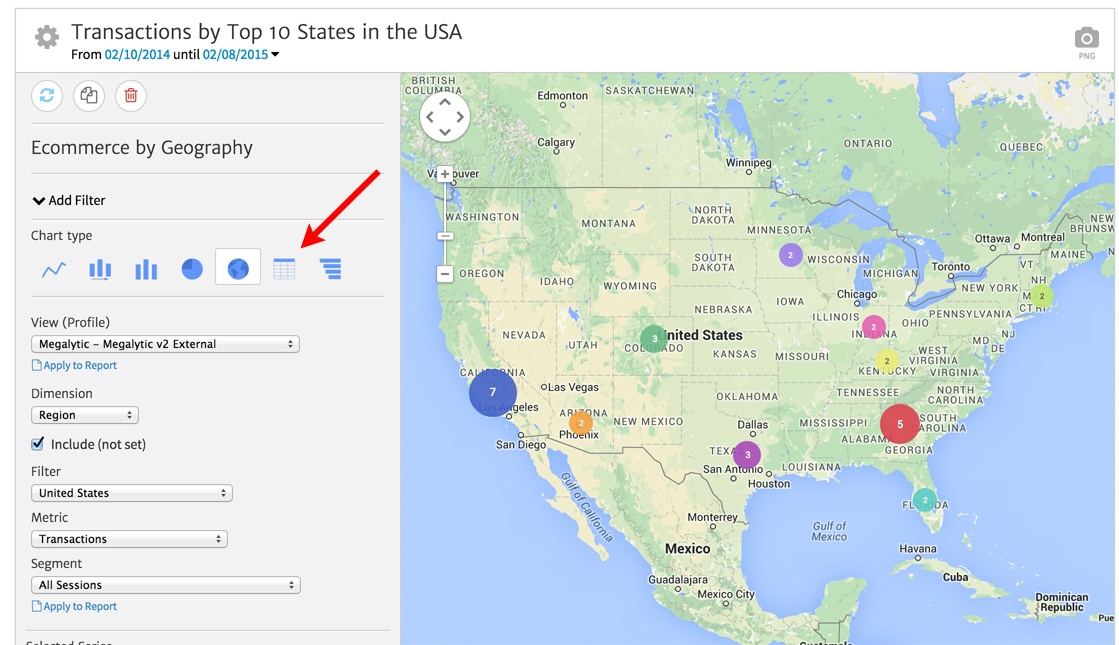 This will transform the representation of the data from a map format to a table format. In the table format, you have room for up to five columns for Ecommerce metrics. In this example, we are showing the default columns: Transactions, Revenue, Average Order Value and Per Session Value.

The beauty of Megalytic is that, once you have set up your Ecommerce report, you can easily update it each month to show the latest results. That will enable you to produce your report in minutes, rather than hours. To finish it off with some custom commentary, consider adding a Cover Page to summarize, or individual Notes among the widgets with text to explain the numbers and relate the data to specific business objectives.